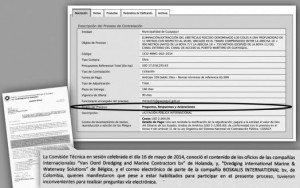 Three foreign companies are interested in submitting proposals to participate in the tender for the removal of the rock obstacle called Los Goles, located in the external access canal to the seaport of Guayaquil.

The Municipality announced the possible involvement of these companies, on 19 May, after modifying the timeline of the hiring process at the National Public Procurement Service (Sercop for its Spanish acronym) .

The submission term of questions about the process was extended until yesterday, which was scheduled until May 12 in the previous timeline.

According to the municipality, this change was made because the interested companies could not submit their questions electronically because of inconvenience not detailed in the document.

According to the schedule, submission of bids is expected until July 4 and would be awarded until the 11th of that month.

Supercom will verify circulation of print media since August