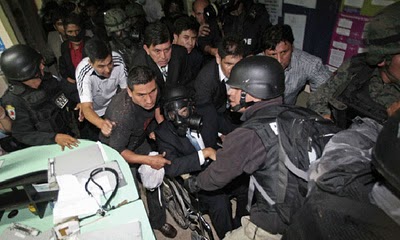 After it was published last Tuesday a final report of the Executive Committee which established that onSeptember 30, 2010 there was a “soft coup d´état”; in response to this, Former President Lucio Gutiérrez (SP) and the Leader of the MPD Luis Villacis agreed yesterday that such a resolution is not true.

They were mentioned in the report as part of a “concerted conspiracy” occurred that day to “destabilize and depose” Rafael Correa.

According to Gutierrez, September 30 there was an institutional claim and not an attempted coup d’état, magnicide or kidnapping against Correa.

Villacis said that the Commission was formed to “pursue social fighters” as Mery Zamora, former leader of the UNE. In his opinion, they´re “looking for guilties of a nonexistent fact …. it has not legitimacy.”