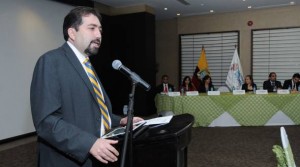 The Organic Law on Transparency and Access to Public Information (LOTAIP) became effective in 2004 and until now it is not fully met. According to a report of the Ombudsman’ s office, there are 31 institutions in the country that maintain 584 records classified as reserved.

The five institutions that more information have under reserve are the National Telecommunications Corporation, the IESSBank, the Attorney’ s office, the Superintendency of Banks and Insurance and the Oceanographic Institute of the Navy.

All public or private entities that receive public funds must transparent their information according to the law. And according to the Ombudsman Ramiro Rivadeneira, in the last five years, access has improved thanks to the signing of an agreement with the Secretariat for Public Administration in 2013. For example, in 2012 only 67% reported on the fulfillment of the law. In2013 the 100% did it.

The Ombudsman’ office requires annual reports to about 1500 entities on legal compliance. For the next period, 389 NGOs, social organizations, universities and concessionaires shall also do it, upon receiving state resources.