President Correa criticized the presence of Ecuadorian organizations in the IACHR 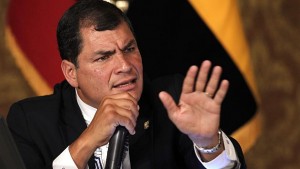 The President Rafael Correa criticized the presence of 14 Ecuadorian organizations at the Inter-American Commission on Human Rights (IACHR), during a dialogue with media in Guayaquil.

“Who believes them the show that they want to do . The indigenous movement are in crisis that they have to take non-indigenous. Carlos Perez (ECUARUNARI) is not indigenous and he going as the indigenous representative. Who mindslistening to something like this? If they want to live in social deceit, what can we do. Is the same show as all the years and we should not give them the slightest importance,” Correa said.

In this regard, the Foreign Minister Ricardo Patiño questioned that this type of hearings are not to treat particular issues but general topics. “However, although the IACHR knows that it is part of its rules, it dares to confuse and mix the general issues with individual complaints.”