39 judges possessed of the Judicial Council 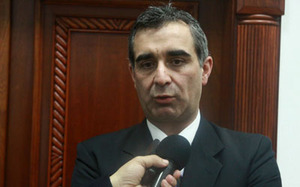 During the inauguration of the Florida Norte court complex in Guayaquil, the President of the Council of the Judiciary (CJ), Gustavo Jalkh, gave office to 39 new permanent judges for the Guayas province.

Through these appointments, Jalkh indicated that temporary judges figure was eliminated in the administration of justice. Regarding the subject he said that since May they have taken 95 judges across the province, which were chosen in public tenders organized by the Judiciary.

During his speech, the leader of the regime, Rafael Correa, said that the new system of justice has no place for temporary judges, because, mostly, they acted “improperly.”