4 vocals held positions in the Executive 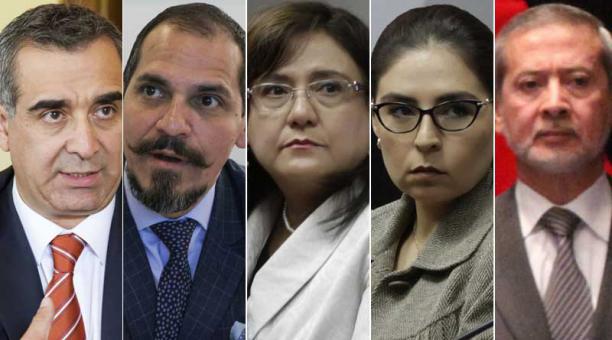 Nine members of the Judicial Council will attend today, Wednesday, May 30, 2018, the Oversight Committee of the National Assembly. The objective is to present the evidence of discharge to indicate that they did not breach their duties, within the impeachment process that is being held against them.

The President of the Council, Gustavo Jalkh, and the rest of the titular members held meetings during the morning of May 29, said the Social Communication staff of the Judiciary. Therefore, they did not give statements.

During the afternoon, each member of the Council prepared, in their offices, the documents that are expected to be delivered today during the inspection session, at 09:00. In the first place, the four alternate councilors will be presented and then the incumbents will participate, according to the order of the day that was released yesterday (May 29).

The members of the Council of the Judiciary who are in office were elected in 2013 by the Citizen Participation Council (Cpccs) which ended with the February referendum. Its selection process was carried out through lists sent by the functions and institutions of the State, according to the reform approved in the referendum and popular referendum on May 7, 2011.

Then, the opposition groups observed the proximity of those who were finally possessed as regular counselors in the Judiciary. For example, the president, Gustavo Jalkh, was interior minister during the government of President Rafael Correa. He also held the position of his Private Secretary. And he led the short list of the National Court of Justice in the selection process that began in 2012 and ended in 2013.

Néstor Arbito was the first in the list sent by the Public Defender. He also served as Minister of Justice during 2009 and 2010. Before that, he was Undersecretary of Jurisdictional Coordination of the same Portfolio, during 2008. In 2011 and 2012 he held the position of Dispatch Advisor 2 of the Ministry of Electricity.

Arbito denied, in a radio interview on April 18, that there had been an interference in the Justice, which is one of the observations against the Judiciary. And he said he was proud of what was done to improve justice in the country. For him there is no evidence of an alleged breach of functions, nor of a “sticking hand” in the decisions of the judges.

Ana Karina Peralta, held the post of Deputy Minister of Justice in 2009 and was a legal advisor to the National Communication Secretariat a year later. She led the short list sent by the Assembly.

The fourth member of the Council is Alejandro Subía. He has 30 years of experience in information technology services, administrative models by processes, justify investments for projects, among others. He was presidential advisor of Government Computing during the Correa regime.

The former president sent a shortlist consisting of Paulo Rodriguez, Subía and Glenda Calvas to occupy one of the positions of vocals. Cpccs chose the first as principal and the second as alternate. And after Rodríguez’s resignation, in August 2013, Subía replaced him. The list of titular members in the Judicial Council is completed by Rosa Elena Jiménez, who was second in the list sent by the General Prosecutor’s Office.

She became principal after the resignation of Tania Arias in 2015, arguing that she would have “new challenges”. Jiménez was counselor of the Electoral Delegation of Guayas. And, along with ex-ambassador María Paula Romo and former Minister Gustavo Jalkh, she was a supporter of the National Coalition for Justice.

The session of the Examination Board today (Wednesday, May 30) will begin with the appearance of the alternate members: Marco Maldonado, María Dávalos, Carlos Delgado and Glenda Calvas. The Commission considered it unnecessary to call the last substitute, Irene Pesántez, because she did not take office in the Assembly and did not participate in the meetings of the Judicial Council.

After the appearance this morning, the Commission will have five days to issue a report on the relevance or otherwise of the political trial in the Plenary. Homero Castanier (I think) pointed out that a single report should be made according to the degree of participation of each vocal.

“It may be that some are saved from the trial,” he said. In parallel, these same vocals are also questioned before the transitory Cpccs. It is the institution that has received the most citizen complaints (704). And on Thursday they will have a public hearing, as part of their evaluation, which could also determine their early termination of functions.

Studies: He is a PhD from the University I, Pantheón-Sorbone, with an emphasis on the peaceful solution of international conflicts. He has a diploma in Advanced Studies in Criminal Law and Criminal Policy.

Studies: He is a lawyer from the Santiago de Guayaquil University. He has participated in mediation and arbitration workshops, fiduciary and titling seminars and intellectual property in several dependencies.

Studies: Master’s Degree in Governance and Political Management and lawyer from the Santiago de Guayaquil Catholic University. She has a diploma in social responsibility from the University of Monterrey.

Studies: Master’s Degree in Constitutional Law from the Espíritu Santo University. Diploma and specialization in customs matters from the Universidad del Pacífico, lawyer by the University of Guayaquil.

Estudios: Civil Engineer from the Catholic University of Ecuador, training in systems engineering at IBM, 2,000 hours of technical management courses, strategic planning and systems integration. (I)