4,000 fissures and microcracks identified in Coca-Codo 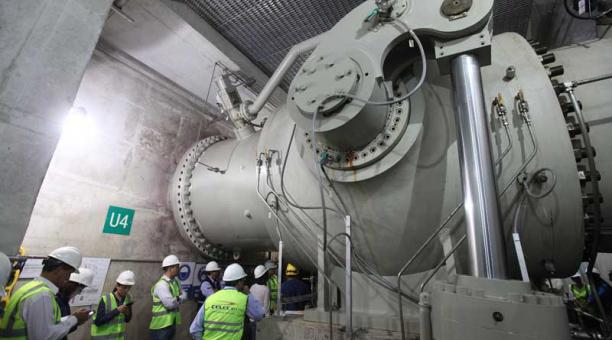 More than 4,000 fissures and microcracks have been identified so far in Coca-Codo Sinclair, the country’s main hydroelectric plant, which has been in operation for a year and seven months.

The defects are found in the distributors, which are structures that receive the flow that comes with force, after falling 620 meters from a reservoir and then by a pressure pipe. This information was released on Monday, July 2, 2018, by Carlos Pérez, Minister of Hydrocarbons, Electricity and Mines, in a radio interview.

“It’s not normal, it’s a problem of steel and how it was welded.” According to reports to which the Ministry has agreed, the Sinohydro company – in charge of the construction of Coca-Codo – subcontracted the manufacturing of the distributors. These were made in China and “apparently” did not follow the proper procedures for welding.

This would have caused stress on the material, causing the formation of cracks and microcracks that must be repaired by the company Sinohydro, which has not yet delivered the work to the Government in a definitive manner. To mitigate this problem, at the beginning of June of this year work was done to repair these faults of the distributor of Unit 4 of this hydroelectric plant.

These days it is planned to do the same procedure with that of Unit 2. Coca-Codo Sinclair has eight units. For Carlos Baldeón, president of the School of Mechanical Engineers of Pichincha, this type of procedures will not solve the defects of these equipment, because each repair weakens more the material (steel).

Because of this, he recommends that new distributors be installed. Apart from these measures, Perez informed that he has requested, separately, two exams from two companies to know if the defects identified in this plant are minor or major problems, which could cause catastrophic damages in this hydroelectric plant, which has an installed capacity of 1 500 megawatts (MW).

The purpose of these reports is to obtain the technical and metallurgical analyzes to know what happened in this project, which was promoted by the previous Government. “We need this evaluation. This could determine, if it is the case, I do not say that it is so -if it is not a solvable problem-, that even Sinohydro has the contractual obligation to build a new machine room if it is a serious problem, “said Minister Pérez .

The defects in this plant were identified in 2014 and confirmed by the company Consulting Inspection Services (CIS), in a report dated April 8, 2015, before the plant came into operation, which occurred in November 2016 This study was requested by the Directorate of Management and Supervision of this project, the CFE-Pypsa-CVA-ICA Association, in February 2015, after identifying these defects in the distributors of units 1 and 4. In the inspection carried out CIS in the eight distributors of Coca-Codo Sinclair, it was identified that the cracks in these structures originated, in part, for the quality of the materials.

In this report it was noted that these distributors were not built with materials that meet international certifications (ASME). These standards were not handled in the manufacturing, assembly and assembly processes, said CIS. In addition, in its core part the consultant’s report stated that “as long as the source of the problem is not fixed, it is expected that there will be subsequent cracking in other areas not inspected.”

To know how this project was handled, Perez asked the Comptroller to evaluate this plant, along with the other hydroelectric plants: Sopladora, Manduriacu, Toachi-Pilatón, Minas-San Francisco, Delsitanisagua, Quijos and Mazar-Dudas. The first two already operate.

To complete Toachi Pilatón there are still two more years of work, if they overcome the current contractual problems with the firms responsible for the work and the audit, said Perez. (I)