529 Muslim Brothers are sentenced to death in Egypt 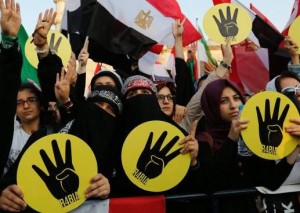 This monday an Egyptian court issued the death sentence to 529 people by the assault to a police station the middle of last August in which a police colonel was killed.

Most of the accused had been arrested during clashes in the Minya province, south of the country, after the dispersion to force of two protest camps of the Muslim Brotherhood in Cairo.

The charges against the group, whose trial is conducted in Minya since last Saturday, includes violence, incitement to murder, a police siege, attacks on persons and damage to public and private property.

The drastic verdict is part of a campaign of increasingly intense repression against the Muslim Brotherhood which started after the coup d’état last summer.