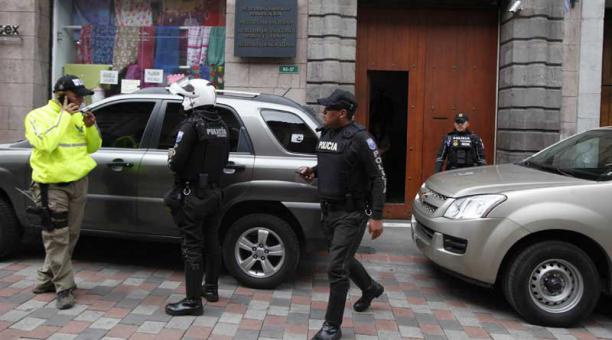 Six officials of the Municipality of Quito were arrested on Thursday, April 19, 2018 in the morning, in the middle of an operation developed by the Office of the Prosecutor to investigate an alleged crime of illicit association.

The prosecutor Eduardo Estrella, who works on this case, said that the people who are investigated have a relationship with the Municipality of Quito. “There would allegedly be several citizens who would be carrying out illicit actions linked to the Municipality of Quito.” In addition to them, two councilors were “detained” and taken to the Prosecutor’s Office to make a statement about what they knew about the subject.

From 07:00, the fiscal agents and members of the National Police initiated the raids; Up to noon, there were 14 buildings intervened by the authorities, including the Mayor’s Office, located in the Historic Center.

Around 11:00, one of the councilors detained went to the Prosecutor’s Office of Pichincha and said that he was only going to give his version on a matter of which he had no knowledge.

Four months ago, the Office of the Prosecutor opened the investigation into this case, after receiving complaints from Pichincha transporters about alleged unlawful acts related to officials of the Cabildo.

In this operation, called Ares, the offices of the Ministry of Mobility of the Municipality of Quito, the Metropolitan Public Mobility and Public Works Company (Epmmop), the Chamber of Transport and the Mayor’s Office were searched. 16 police officers and more than 40 members of the police participated in the raids.

According to the fiscal (s) of Pichincha, Fabián Salazar, the affected ones assured that they had to make payments with the objective of “resolving their needs”.

The first inquiries detail that this alleged network would have moved at least USD 80 million. However, that figure could vary as the investigation progresses.

The Prosecutor of Pichincha did not specify if the investigation only refers to the regularization of taxis, but – he pointed out – it would be an affectation to the Pichincha transporters in general.

After hearing about these events, which altered the activities of the Mayor, the principal of that entity, Mauricio Rodas, said at a press conference that he regrets what is happening with the municipal institutions.

In addition, he assured that there will be a total opening of the Municipality of Quito to collaborate with the development of the investigations and provide the information and elements that are necessary.

“We are the first interested in clarifying the truth,” said Rodas.

“I have held meetings with the representatives of the State Attorney General’s Office to offer them the full support of this Mayor’s Office, for the development of the investigations that are required,” said Rodas.

During the raids, the gendarmes seized a large amount of money and other elements that could serve as evidence to support the case, said prosecutor Salazar.

According to the independent councilor Daniela Chacón, a year ago – when the process of regularization of 8,693 taxis started – there were complaints about the alleged charge to get a quota.

Chacón recalled that the regularization of taxis was not the only process that was carried out in the last year, but there were also processes to legalize public, institutional and tourism transport.

Two councilors were taken by members of the police, as detainees. While six other officials of the Municipality were in the capacity of detainees and yesterday it was expected that the hearing to formulate charges in the Office of the Prosecutor would be held. (I)

Ramiro Mantilla: “Crossing the Mataje River to the Colombian side is a risk”

There are no signatures for all political organizations