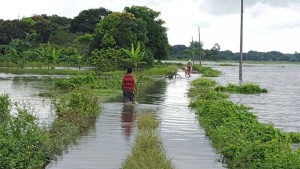 Six houses from the Abdon Calderon sector (about 2 kilometers north of the bus terminal Manta) were waterlogged by heavy rain in Manta, yesterday.

The rains began at 10:30 and lasted about 40 minutes, said the director of the Risk Management Unit of the Municipality of Manta, Eduardo Almeida. The official said there was no need to evacuate the families living in these houses, located near slopes.

“There were no evacuations and staff of the Fire Department and the Municipality removed the excess water so there was no need for relocation,” said Almeida.

The rainy season also created havoc on the agricultural sector in this and other provinces. In Rocafuerte, rice crops were flooded.

Agriculture Minister Javier Ponce, visited yesterday the zone to check the effects of the storm. In this town, the secretary of state said that around 7,000 hectares have been affected nationwide so far this year: Los Rios (3,000 h.), Gold (2,000 h.) and Guayas (2,000 h.). (I)