8 deaths were officially registered in the 11 days of protests

The Public Advocate Office has “the confirmation of 8 dead people nationwide, with Pichincha being the province with the highest incidence”, in the context of the protests against Decree 883, between 00:00 on Thursday 3 and 24:00 from Sunday, October 13, 2019 in Ecuador.

The body that watches over the protection of Human Rights in the country revealed on Monday October 14 that during the demonstrations there were eight deaths, 1,340 people who received medical care and 1,192 detainees nationwide. 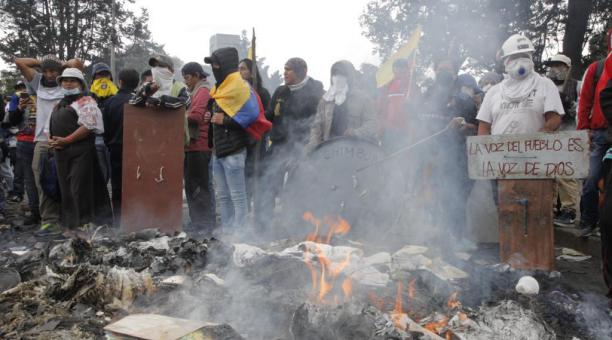 8 deaths were officially registered in the 11 days of protests

According to the Defensoría, the first fatality victim was Raúl Chilpe, 34, who died on Sunday, October 6, in a road block in the Austro, when a private vehicle ran over him in the sector of El Chorro, on the Cuenca- Molleturo, in Azuay.

Marco Otto and José Daniel Chaluisa lost their lives in Quito on Monday, October 7, when in an incident under investigation they fell from the San Roque Bridge, during a persecution of police officers.

The indigenous leader of Cotopaxi Inocencio Tucumbi, died on Wednesday, October 9 in the vicinity of El Arbolito.

According to his family, the incident occurred when he was running for a police action against protesters.

According to the Minister of Government, María Paula Romo, “the death certificate and the autopsy … confirms that it was a fall, not a blow, or suffocation, but a fall.”

The four deaths were reported by Romo at a press conference on Thursday 10. The Ombudsman’s Office has the record of four other deaths: José Rodrigo Chaluisa, Abelardo Vega, Silvia Mera and Edison Mosquera.

But he did not specify the circumstances of those deaths.

The Ombudsman points out in its report on Monday that 1,340 people attended by personnel from the Ministry of Public Health, the IESS and the Ecuadorian Red Cross were registered.

Likewise, the agency notes that it learned that between 00:00 on October 3 and 11:30 on Saturday, October 12, “94 patients were admitted to the National Police Hospital (in Quito) in the context of unemployment.”

As for the 1 192 citizens apprehended, the entity reports that the largest number of detainees is recorded in Pichincha (532). They are followed by Guayas (310) and Tungurahua (59).

131 journalists were attacked in the national strike