80 cases of alleged persecution are submitted 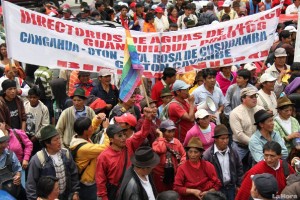 Leaders of social, indigenous, teachers and collective organizations yesterday submitted a report on ‘criminalization of protests, memory of resistance,’ in the nine years of government.

80 cases of alleged political persecuted involving 700 people tried for crimes such as sabotage, terrorism, attack or resistance, rebellion, libel, violation of state security, among others, are included in the document.

Carlos Perez Guartambel, president of the Ecuarunari, considers that the regime broke all previous records with more than 700 people judicialized: “There has been no government that has put so much strength in criminalization to sow fear on organizations.”