A battle of programmers 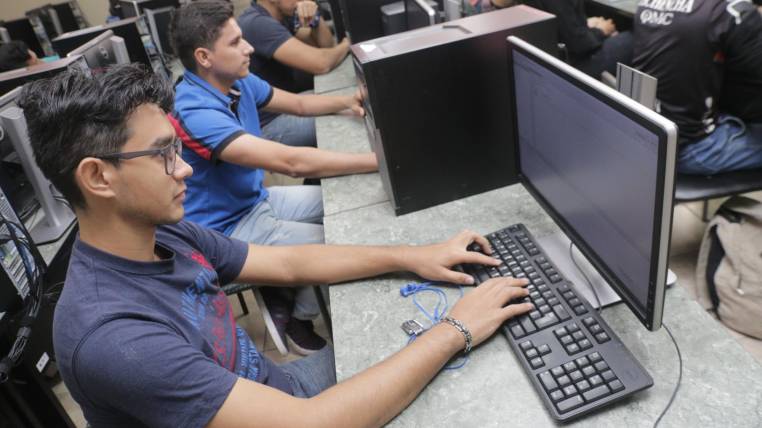 What is the use of computer programming? The answer is simple: to optimize work through computers; from the registration of purchases in a supermarket, the operation of a calculator, to the control of a robot.

This need for programming motivated nine teachers from the Polytechnic School of the Littoral (Espol) to create a competition, called ‘PyWeekend’ – which brings together the 150 best ‘hackers’ of the university – to solve real problems through the technology, and so that those who do not know about the subject are instructed.

“The idea is that all students learn to give orders to computers, that’s why the basics of programming was implemented for all the races,” says Estefanía Lozada, coordinator of the hackathon (meeting of computer programmers).

Kevin Rivera is 21 years old and follows the career of electronics and automation, he was one of those selected to represent his parallel. “When I was nominated for this contest I felt happy, and that motivated me to prepare myself and improve my shortcomings,” he says excitedly.

The contest of programmers will take place tomorrow, from 08:00 to 18:00. Today, starting at 2:00 pm, the delivery of the categories and computer cases that students will have to solve will take place.

For the academic preparation – prior to the contest – from last Wednesday, July 25, “tutorials were held depending on the theme chosen by the students,” explains Rafael Bonilla, coordinator of the subject and teacher.

Although Bonilla recognizes that it is not important to know about the subject at an advanced level, he believes that having basic knowledge provides important cognitive skills in the performance of students’ professional careers.

‘PyWeekend’ is done since last year, on two dates; the first in January and the other in August. Challenges challenge participants’ problem-solving and scheduling skills.

Each category will have a winning team, that is, in the end four groups -who will obtain economic prizes- will be selected to face each other in the final, with the objective of choosing only one winning team, who will be awarded the recognition medal.

The four themes of the contest

The challenges of the competition will be: education, smart games, marketing and meteorology. “Each category has real life challenges, proposed by computer researchers and teachers”, explains Lozada.

For the selection of the competitors, the teachers of the fundamentals of the programming – regardless of the career – chose three representatives for each parallel, with the condition that there is a man and a woman among those chosen to ensure gender parity.  (I)