A boat with solar energy is navigating in Galapagos 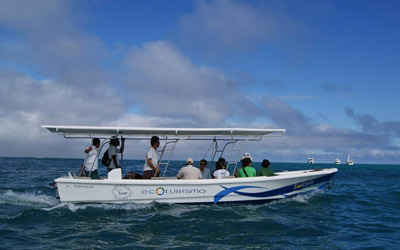 The International Organization World Wide Fund for Nature (WWF) reported through their website that a boat that uses solar energy to navigate in the Galapagos Islands is the result of a joint project between the international organization and the Galapagos National Park (GNP).

The statement says that the boat that previously used fuel, had been seized during an operation of illegal fishing, but it was transformed to work entirely with solar energy, thanks to eight panels that are located on the deck connected to two batteries which can store and provide power for eight hours.

Solar energy comes to an electric motor that reaches the speed of water taxis which move with fuel. According to the WWF, this engine is lighter and requires less maintenance (no oil changes) that one operating with fuel.

This boat is part of a project to reduce the human footprint and the promotion of eco-tourism in the Galapagos National Park, where the main means of transport are boats and ships.