A book is published; A wasted decade, a criticism from the left to the model of Rafael Correa 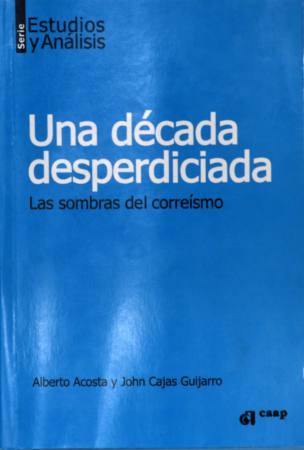 With the book A Wasted Decade, written by Alberto Acosta and John Cajas Guijarro, the Andean Center for Popular Action presents an analysis of economic management during the government of Rafael Correa. His conclusion: despite the makeup, the “enchanted pots” of reformist rhetoric, Ecuador never changed.

“The correísta decade did not have anything of” revolutionary “; rather it was a stage of conservative restoration “, they maintain -using the same figure with which Rafael Correa modeled his ideological enemy- when referring to economic, political and cultural structures.

Quite the opposite, they say, his model reinforced the hegemony of the elites and instituted a “technocratic paraphernalia” that ended up diluting a real opportunity, because of the political facilities that gave him popular support and the millionaire income of the State.

The extractivism, the proposals of environmentalists and social organizations, as well as the personality cult of the caudillo, based on a giant deployment of infrastructure, are part of the study.

The text is composed of five chapters, with analysis, opinions and economic statistics. The first deals with crises; the second is a theoretical approach (from criticism to capitalism); the third, a recount of the crisis in the midst of abundance; the fourth reveals a false transformation of the productive matrix, and the fifth describes the accumulation of capital in business groups.

After the introduction, the authors begin chapter 1 with an appointment taken from an intervention by Correa in 2015: “In economics there are no miracles,” he said. But they immediately complete the idea. They say that it is true, that in the economy there are no miracles, “but what there is – and to spare – are the economic farces.” The rest of the argument is displayed in 258 pages.

Both are economists linked to academia and leftist positions. Alberto Acosta was also a close collaborator and minister of Rafael Correa at the beginning of his term. Then he distanced himself and became one of his greatest critics. John Cajas Guijarro is a professor at the Central University and the National Polytechnic School.

The book – which costs $ 15 – is already on sale in bookstores in Quito and Cuenca since last week. The CAAP informed that it will soon arrive in other cities. (I)