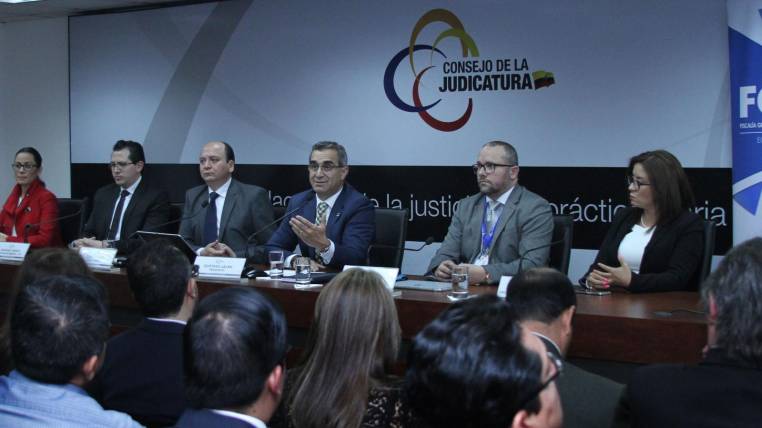 There is always a talk of the relationship between politics and justice. If that ‘marriage’ is taken to specific cases, it is possible to observe that the judicial rulings during the time of the correísmo inclined in their majority in favor of those who held the power and their relatives. The funny thing is that now it’s the opposite.

With the possession of President Lenin Moreno, the situation has changed and those who from before the power praised the judicial work now question it. Coincidence? There are no coincidences, conclude experts consulted by EXPRESO. This is the reflection, they agree, that justice instead of independent conforms to who is in power.

“The politicization of justice remains as it is. What we see is that having changed the polarity of justice has changed the way judges act, but always with a political sense, “explains Ramiro García, president of the Pichincha Bar Association.

That “change in the way judges act” to which Garcia refers is very premature to describe it as a true change in justice, says María Dolores Miño, executive director of the Observatory of Rights and Justice, and professor at the University of Las Palmas. Americas. The expert believes that to start talking about a change in justice requires renewing some faces.

“What worries me is that two people remain in the public service: Gustavo Jalkh (president of the Council of the Judiciary) and Johanna Pesántez (Legal secretary of the Presidency). There is an outstanding debt as long as these people are still there, “he says.

Both officials were immersed in a scandal with the leak of emails that would account for an alleged interference by the previous government in court decisions. This newspaper requested a comment to the Department of Communication of the Council of the Judiciary, but until the closing of this edition did not respond to the email sent on January 18.

García agrees with Miño that head changes, like Jalkh’s (who was also minister and secretary of former president Correa), are fundamental. To this is added other changes of legal order and interpretation of laws.

“It is not possible to maintain the application of the inexcusable error as part of the administrative entity when this must be solely and exclusively jurisdictional power. Only a judge can establish it, not the administrative authority, “he says. Miño believes that it goes further on the side of a cultural change, that is, to stop seeing as normal that justice is subject to a political will.

EXPRESO also requested an interview with the president of the National Federation of Judicial Associations of Ecuador, Eliseo García, but did not respond to the request.

The Electoral Litigation recognized Lenin Moreno as president of the ALIANZA PAIS movement, leaving the Correistas without movement.

Although it is not a ruling, the silence of the Constitutional Court gave way to the call for popular consultation and referendum, rejected by the correístas, who say it is unconstitutional.

The IACHR and the OAS

These two international entities, which the former president criticized harshly, are those who now hear it.

asked for information about the consultation. (I)

Spain asked the European union to exonerate Ecuadorians from visas, according to Moreno