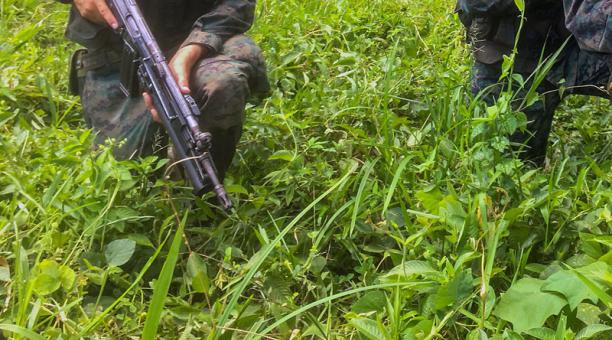 A Colombian soldier was killed and another was wounded on Sunday, April 22, 2018 after stepping on a minefield in a rural area of the department of Nariño (south), bordering Ecuador, military sources said.

The incident occurred in the Casas Viejas farmhouse in Tumaco, when troops from the Joint Task Force for Stabilization and Consolidation Hercules carried out “security work to strengthen the strategy to eradicate illicit crops,” the army said in a statement.

The soldier who died was the second lieutenant Juan David Campo Guacheta, born in the neighboring department of Cauca (southwest), and the wounded is second corporal Luis Rengifo Manco, from Antioquia (northwest), both of the First Division of the National Army.

The wounded soldier was taken in a helicopter to the municipal seat of Tumaco, where he receives “the respective medical attention and enters the operations area of the Technical Investigation Corps to carry out the urgent acts.”

That group, calling itself the ‘Oliver Sinisterra Front’, is the author of the murder of three workers of the Ecuadorian newspaper EL COMERCIO and the kidnapping of two civilians also from Ecuador.

Tumaco, the municipality with the most hectares of coca planted in Colombia, is one of the most conflictive areas of the country, where dissident FARC, the guerrilla Army of National Liberation (ELN) and a dozen criminal gangs try to establish their domain.

Guerrillas of the front Domingo Laín Sáenz of the ELN also assassinated a Colombian soldier in a rural area of the department of Arauca, bordering Venezuela, according to the Army. (I)