A complaint for vacation uncovered the transfers plot 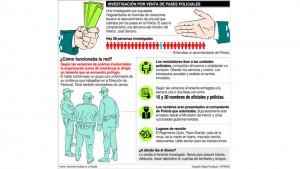 About 5,000 transfers would have been illegally processed within the police. 6,000,000 dollars were at stake. The investigation into the case of alleged organized crime already has 16,000 pages.

How did it start? In January 2015, the prosecution received a report of an organization that misused police weapons. The investigations determined that the illegality was not found in the weapons but on the alleged negotiation of vacation. Hence, the was only one step from the ‘sale’ of transfers.

In July 2015, when the complaint of Interior Minister Jose Serrano arrived, the prosecution was already looking for the connection of a sergeant in the alleged network, a source of the justice department told to daily Expreso.

Serrano´s version is that the prosecution was investigating “how they were issuing fraudulent leaves from a structure in which officials of the Transit Agency and the National Police were involved,” he said yesterday in Ecuavisa.

The initial inquiries were conducted by prosecutor Tania Moreno. She had the record for over a year. Due to the immunity of former commander Fausto Tamayo, linked in February, the case was transferred to the Prosecution of Pichincha, led by prosecutor Wilson Toainga.