Now there were 13.5 tons of calcium chloride. “Two trucks!” Tweeted Minister Maria Paula Romo without saving the signs of admiration, surprised because the catches are getting bigger, more and more frequent. The National Police Chemical Investigation Unit found them in Tulcán, ready to be transferred to Colombia. The operation was called ‘Victoria 73’, it happened on January 31 and it is only one more on a long list: from time to time, anti-narcotics agents find calcium chloride like rice. This substance, with numerous legitimate uses ranging from agriculture to cheese making, also serves to dry basic cocaine paste and is used as raw material for the artisanal production of hydrochloric acid. It is, therefore, a substance subject to control and control by the State, control and control that the authorities in charge qualify as “strict.” It should be added: as strict as the law allows. And the law (another undesirable inheritance of correism) suffers from a vacuum. More than a vacuum: a gap as big as the one that sank the Titanic. This time with the personal and direct participation of Rafael Correa. 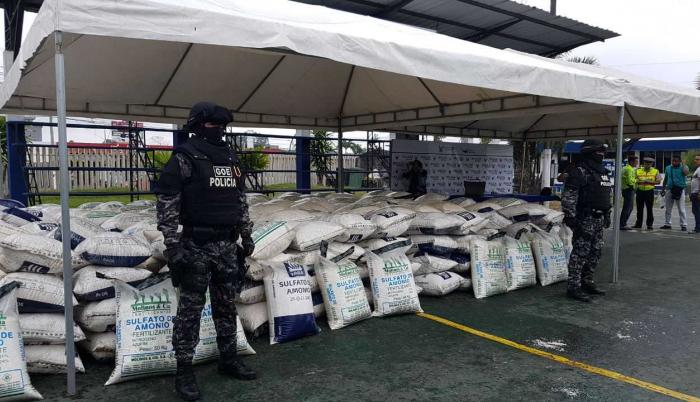 Regarding the latest operation, the Police Anti-Narcotics Director, Marco Villegas , explained that the substance comes from Peru along the southern border. “Because in Ecuador,” he said, “being controlled, it is difficult to buy it.” An unsatisfactory explanation: if it is so difficult to buy calcium chloride in the country because it is a controlled substance, it should be equally difficult (if not more), to enter it by the border. In addition, the words “being controlled is difficult to buy” leave a fundamental problem intact, namely: it is not difficult for everyone to buy controlled substances in Ecuador. For some it is quite easy, and this has been the case since April 2016 thanks to a resolution of the Presidency of the Republic.

September 5, 2015: in the Saturday television kermes from which he governs, Rafael Correa reports on his latest whim: to break down the National Council for the Control of Narcotic and Psychotropic Substances (Consep), the body responsible, among other things, for monitor the use, marketing, transport and storage of substances used as precursors by the drug industry. It was an independent entity of the Executive that was accountable exclusively to the State Attorney General’s Office and functioned as a Swiss watch. Correa decided to replace it with a secretariat attached to the Presidency of the Republic: the Technical Secretariat of Drugs (Seted) . So, in application of strict respect for the independence of the functions of the State that always distinguished him, he appears on Saturday and gives the order to his Assembly: “Quickly approve the reform and that the Consep pass to the Presidency and in two weeks We solve this. ” It took a little longer to obey: in December the thing was done. The administrative transfer was made, a new regulation was elaborated and Rafael Correa became the direct head of the officials who controlled the use of chemical precursors.

Privileges It is not difficult for everyone to buy controlled substances in Ecuador. For some it is very easy, thanks to a resolution of the Presidency of April 2016.

On April 25, 2016 came the surprise. The owner of the Seted, Rodrigo Suárez, issues a resolution of five articles by which he modifies the scope of his competence. Does it extend it? No, it restricts it. “Resolves: Article 2.- Exempt from the regulation and control regime public sector entities, who do not require qualification or occasional authorization from the Technical Secretariat of Drugs.” From that moment they can freely buy, transport and trade chemical precursors (calcium chloride, for example) all sectional governments, hospitals and pharmaceutical companies of the State, metalworking, electrical industries and public companies in general. Among them, the largest of all, Petroecuador: the largest buyer of controlled substances in the entire country, including calcium chloride , which is used to dry oil wells and prevent the expansion of clays. Petroecuador, the company with the most cases of corruption proven or in the process of investigating the correísta decade.

Today the Seted, by decision of Lenin Moreno, no longer exists. It was replaced by the Technical Secretariat for Control and Administration of Cataloged Substances Subject to Control (the names of the new public entities are ridiculously kilometric and impossible to remember), belonging to the Ministry of Government. But the laws of the former Seted, including the resolution that exempts companies and public bodies from control, remain in force. “This is about to change,” Andres de la Vega, the deputy secretary of … that, told this newspaper. He is concerned, precisely, with the Petroecuador case. A new regulation that repeals all of the above is ready since November and pending publication in the Official Registry to enter into force. Then, he admits, there will be a transition that he estimates will last six months.

“It is a complex situation,” he says, “we cannot overnight control public agencies, they will object to us.” It is necessary to “socialize,” he says, and also meet certain requirements that the chemical precursor control system itself demands: preparation of personnel who can assume responsibilities before the controlling body, for example. Meanwhile, it will continue to deal with one of the most pernicious (and frankly suspicious) inheritances of correism. Ecuador has calcium chloride for a while.

February 26, 2014: The National Intelligence Secretariat (Senain) issues a document entitled ‘Report on demobilized FARC to Ecuador’, which informs the highest government authorities of what was happening on the border with Colombia. Basically, that armed gangs in the service of the Sinaloa cartel had taken over northern Esmeraldas; that fronts 30 and 48 of the FARC, allied with local mafias, made regular shipments from San Lorenzo; that 2,000 guerrilla troops and 300 mercenaries controlled the routes. The government’s response was immediate: that same year, Interior Minister José Serrano declared the fight against micro-trafficking (yes, micro-trafficking) as the top priority of drug policy.