The political quota abroad, that is, of non-diplomatic officials, borders 40% during the term of President Lenin Moreno in the first category, ambassador, and in the second, minister, despite the fact that the Organic Law Foreign Service orders that this percentage cannot exceed 20% and “in exceptional cases of convenience for the country.” 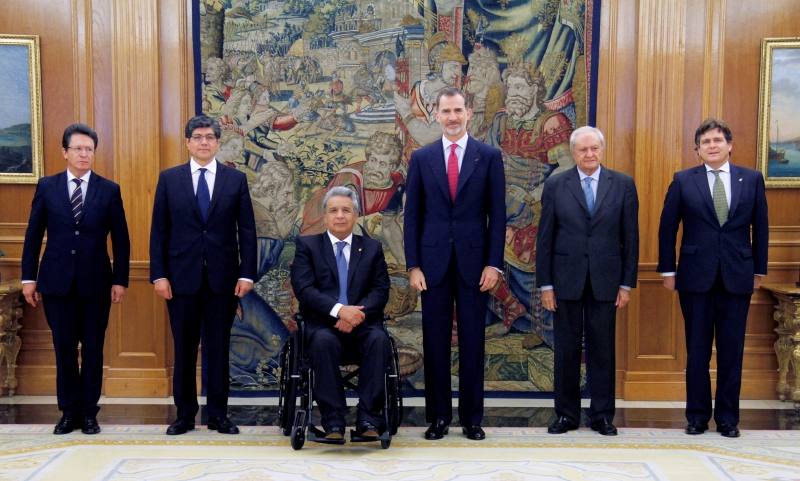 In the last cut – to January of this year – the payroll in the foreign service contains 63 ambassadors and 31 ministers. Of these, 25 ambassadors and 9 ministers are not career, that is, 39.68% and 29%, respectively, are political quota.

To solve the “deinstitutionalization” of the foreign service, the current Government, among other measures, reopened the Diplomatic Academy, closed by the Rafael Correa regime eight years ago, in November last year, precisely to prevent foreign officials from lacking of knowledge in everything related to diplomacy.

“The Ecuadorian foreign service requires trained and specialized professionals in the disciplines associated with international relations and the execution of international politics,” Moreno said in the last recital of Executive Decree 625, signed on December 21, 2018, for the reopening. of the Academy.

However, in the political quota of the current foreign service can still be found from relatives of senior officials, including former ministers, ex-assembly members and people related to the media, in the most paid categories.

Among the requirements of the named persons who are not of diplomatic career it is indicated that they must be “of recognized merits” and “that they have rendered relevant services to the Republic”.

Cristóbal Fernando Vicente Roldán Cobo, father of the current secretary general of the Presidency cabinet, Juan Sebastián Roldán, holds the position of ambassador in Spain with a unified monthly salary of $ 3188 and with a cost of living adjustment of $ 8399 as additional income since May of 2018, one year after the start of the mandate of Lenín Moreno. Roldán Cobo holds a Bachelor of Legal Science degree.

In January 2018, Manuel Mejía Dalmau was appointed ambassador to Germany with a unified monthly salary of $ 3188 and a cost of living adjustment of $ 6875.57 as additional income. When he assumed these functions, he declared that he has a long-standing friendship with the president. He is an entrepreneur and does not register for a university degree on the website of the National Secretariat of Education, Science and Technology (Senescyt).

In the foreign service there are six categories, from the highest to the lowest : ambassador, minister, counselor, first secretary, second secretary and third secretary. The first depends directly on the governor on duty, in this case President Moreno, and the second, on the chancellor on duty.

As an advisor, the mother of Iván Granda Molina, former Anti-Corruption Secretary and current Minister of Economic and Social Inclusion, Yathcia Janneth Molina Coronel, former Deputy Candidate for the Constituent Assembly for PAIS Alliance, in 2007, and has worked in several state agencies since 2010. She is a Master in Culture Studies and is a counselor at the Ecuadorian consulate in Mexico with a unified monthly salary of $ 2034 and a cost of living adjustment of $ 2868.

The former ambassador in Argentina with forty years of diplomatic career Fernando Yépez points out that in addition to the increase in non-career ambassadors and ministers, there is a “postponement of diplomatic officials”, that is, there are ambassadors who are in functions that do not correspond to your category

“What aspirations do graduates of the Diplomatic Academy and future students have to reach the highest positions if they are occupied by people outside the foreign service? It’s amazing! ”Added Yépez.

Ecuador’s former ambassador to England Mauricio Gándara said that to get to the foreign service without being a career you have to know the language of the country you are going to, know about public administration and international law. “You should not, for reasons of friendship, name people who in your life have seen a matter of international politics,” he said.

Former Assemblywoman Linda Machuca will be in charge of the New York Consulate until February 15. She shared on her Facebook account last Thursday a note about her dismissal from office. He was four years and does not indicate the reason for his departure. She was a constituent assemblyman, by migrants and national. He assumed at the Consulate on March 1, 2016.