A Model of the First 100% Green City Was Presented 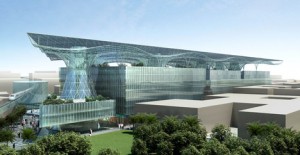 A model of the first 100 percent green city, Masdar City, was presented in Abu Dhabi, during the World Future Energies Summit.

Masdar City will be the first hundred percent ecologic city of the world when it is completed. This city will not produce C02 and will not allow the passage of motor vehicles through the streets, except for automatic taxis (without driver) that run on electricity.

Masdar is being developed on the outskirts of Abu Dhabi since 2008, it is a project involving the Norman Foster architectural firm.

The ecological city plans to house 50,000 residents and another 40,000 workers daily.
Masdar will produce “zero carbon and zero waste” it will also recycle 80% of the water consumed and it will work through renewable energies, such as solar energy.