On Saturday night, February 8, 2020, he arrived at the Mariscal Sucre Airport in Quito , a plane inspired by the ‘Star Wars’ saga , a Boeing 737-800 of the United States company United Airlines . 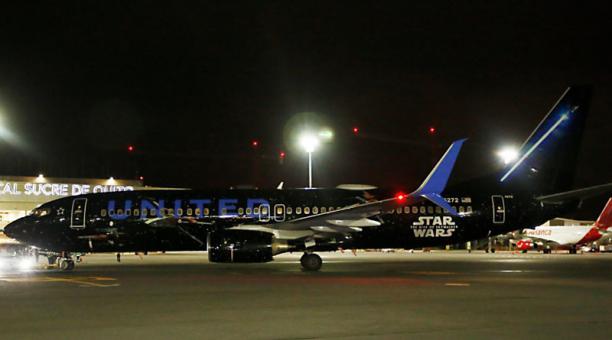 The airline joined Disney to transform one of its planes and celebrate the premiere of the movie ‘The Rise of Skywalker’ , which was on the big screen in December 2019.

The aircraft has capacity for 166 passengers . Doug Chiang, a Taiwanese-American film designer and artist, was in charge of the design of the plane’s painting.

On Twitter, Mariscal Sucre Airport wrote: “Last night the second fastest ship in the galaxy landed at #AerouertoUIO. The passengers of
@United could fly with the duality of La Fuerza in # B738 with livery from #StarWars. ”

On Saturday, February 8, 2020 at night, the second fastest ship in the galaxy landed at Mariscal de Sucre Airport. Photo: Twitter account of @AbúsUIO

United Airlines passengers flew with the duality of force on the B738 with livery from StarWars. Photo: Twitter account of @AbúsUIO

The image is unique, on the outside you can see a dark background with stars , simulating a galaxy. In addition, it has an X-Wing ship and a TIE Fighter fighter . The tail of the Boeing shows a lightsaber with different color on each side, to represent the two sides of the Force.

Inside, the seats have two rows and each one contains the emblems of the Resistance . While boarding the ship, users set themselves with the music of the saga.

The seats of the plane have two rows that contain the emblems of the Resistance. Photo: Twitter account of @AbúsUIO

The plane made its first flight in early February, from Houston to Orlando , Florida. The unique ship has made its service within the United States and also to Central America and the Caribbean .

People can track the commemorative plane route of the ‘Star Wars’ saga from the FlightAware site. You just have to enter the registration of the aircraft: N36272 .