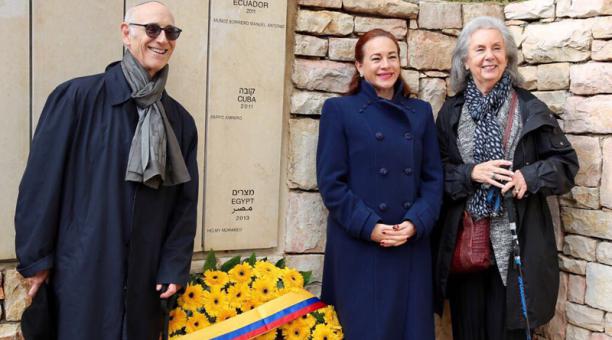 A Jewish survivor of the Holocaust thanked personally on November 22, 2017 the Ecuadorian Chancellor, Maria Fernanda Espinosa that a consul of her country in Sweden allowed his family to escape from the Nazi persecution and a certain death in the concentration and extermination camp of Auschwitz.

This was expressed at an act of recognition held today in Jerusalem and attended by the Minister of Foreign Affairs and Human Mobility of Ecuador, who is in Israel before moving on Friday to Palestinian territory, on her first official visit to the Middle East .

The survivor, Jules Samson, was only two years old in 1942 when the efforts of the then consul of Ecuador in Stockholm, Antonio Muñoz Borrero, allowed his relatives to escape the clutches of Nazism, according to an official statement issued by the Foreign Ministry in Quito.

The Yad Vashem Memorial Museum in Jerusalem, living memory of the six million Jews exterminated in the Holocaust, was the scene of the act of homage 75 years later, in which Samson himself expressed his gratitude to Ecuador, represented by Foreign Minister Espinosa.

Antonio Muñoz Borrero was the first Ecuadorian in 2011 to be recognized as “Righteous Among the Nations,” a designation that pays tribute to those who saved Jews during the Nazi era.

As diplomat Borrero processed the Ecuadorian passport number 179, on January 27, 1942, with which he managed to save four lives: the of little Jules, his sister and his parents.

“Thanks to Dr. Manuel Antonio Muñoz Borrero, we were saved from being sent to Auschwitz and we managed to leave the Bergen-Belsen concentration camp (Germany) long before it was released by the British,” said the survivor, who currently resides in Toronto (Canada) with his wife Ariella, who is also a survivor of the Bergen-Belsen camp.

Grandfather of six grandchildren, Samson said that with his heroic act the Ecuadorian diplomat not only saved those who gave the documents, “but their future children and grandchildren too.”

The Ecuadorian minister visited the Yad Vashem Memorial Museum today, where she laid a wreath in memory of Ambassador Muñoz Borrero and the victims of Nazism, and expressed Ecuador’s commitment to the defense of human rights and the fight against all forms of discrimination. (I)