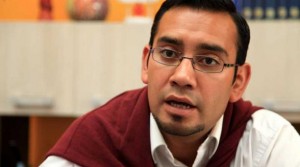 The Provincial Court of Azuay ratified today, Thursday March 31, 2016, the judgment against Sebastian Cevallos, national deputy director of Popular Unity, who denounced via Twitter last July, that several relatives of former Minister of Labor, Carlos Marx Carrasco, would be occupying public office in the south of the country.

On that occasion, Carrasco denied it and warned to file a lawsuit because the the honor of his family was insulted. He also said that there is no nepotism because, in any case, he had intervened for the appointment of the charges, stating that some of his relatives were in those positions before he was an official of this government.

And Cevallos was sentenced for violation established in Section 369 of the Integral Criminal Organic Code (COIP), which dictates 15 to 30 days in prison for the person who, by any means, utters expressions to discredit or dishonor another person.