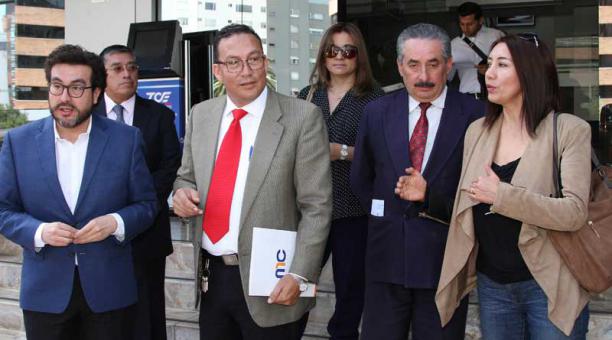 This was how the members of the National Electoral Council (CNE) had to complete the exculpatory evidence, which was to be presented on Tuesday, July 3, 2018, before the Council for Citizen Participation and Social Control (Cpccs) transitory.

They had requested an extension of six additional days to comply with that procedure. And the Cpccs had planned to analyze on Tuesday – over the time limit – the granting of a new term. However, in the end the session was suspended. That decision was known around 12:30. At that time, the dispatches of the five electoral counselors hurried the review of the evidence documents, since if they did not manage to present them they would have to accept the resolutions of the Cpccs without having defended themselves from the charges.

The evaluation report, which is reserved and preliminary, has 250 pages and analyzes the management reports of the members of the CNE based on the evaluation parameters: legitimacy of the position, fulfillment of functions, management of public resources and transparency.

Also, the 50 complaints that the citizens made against the officials are taken into account. For example, Yasunidos observed irregularities in the count of signatures for a popular consultation. Other registered complaints were the non-possession of Solanda Goyes in 2014 after the resignation of Gloria Toapanta, the delay in the convocation to processes of revocation of mandates and the exclusion of the candidacy of Fernando Villavicencio in the legislative elections of February 2017.

Evaluating team found illegitimate the charges of four of the five counselors. Salazar, Villacís, Paredes and Haro finished their period in November 2017 and are extended. “They act when their period has already expired and under an unconstitutional self-promotion,” he says.

Regarding the second parameter: the fulfillment of functions, the report analyzed and found alleged irregularities in seven cases: the selection of Cpccs in 2015, the guarantee of participation rights, the cancellation of the electoral records of the Ruptura and Popular movements Democratic (MPD), the ignorance of the Democratic Left, the non-delivery of the party fund to Pachakutik and the Yasunidos case.

On the economic management of the CNE, five contracts and the assignment of responsibilities to an official are analyzed. “From the review of the aforementioned contracts, it appears that there are different irregularities,” says the conclusion of this point. In the transparency item, the Cpccs found that all the directors have submitted their periodic statements. But “it shows a substantial increase in heritage.” That is why they ask the Comptroller and the SRI to investigate the origin of this income.

As in the case of the Council of the Judiciary -whose result was the cessation of all former members-, the members of the CNE failed to comply with all the parameters. Ana Marcela Paredes, vice-president of the CNE, indicated that the electoral counselors face the evaluation individually. Everyone prepared their tests. Now, according to the rules of the Cpccs, the Plenary must define a date – in a maximum of 10 days – for the evaluated ones to argue their evidence orally.

Each one will have 30 minutes to speak and then they will absolve the doubts of the transitory advisors. After the hearing, the Cpccs will have five more days to decide if the current conformation of the CNE is still in office or if they are dismissed.

The decision will be final after three days, during which it can be contested. In case the dismissal is determined, the transitory Council will have the power to entrust the management of the CNE to any citizen, as happened with the Judiciary and the Ombudsman’s Office. In view of the possible cessation, six representatives of citizen oversight offices asked the CNE on July 3 for up-to-date information on the number of registered organizations.

The objective is to collate the available signatures to know if more organizations could be registered, for the process of March 24, 2019. This initiative seeks to guarantee the transparency of the upcoming elections, in case there is a change of authorities.

The Council of Transitional Citizen Participation will meet today to form the commissions for the appointment of the new Attorney General and of the heads of the Superintendencies of Popular and Solidarity Economy and of Control of Market Power. (I)

Portrait of Rosalía Arteaga as President was placed in Carondelet

The stop in Mirador will reduce investment