About 48 Dead After Coalition Attack in Libya 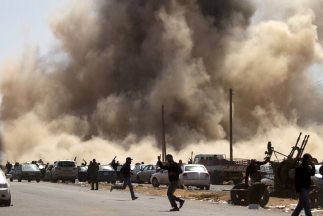 Dawn arrived with air strikes against Tripoli while air defense into action KU deployed in the Libyan capital.

Shortly after 2:20am local (00:20 GMT) anti-aircraft guns installed in the residence, barracks and as leader Muammar Gaddafi in Tripoli sectors opened fire after an airplane flew over this sector in Bab al Aziziya in southern capital however, no indication of the targets of attack could be achieved immediately. The Libyan leader was in a hotel one kilometer from this.

On the other hand, a Libyan official source at least 48 people were killed in air raids and missile launches by the coalition against several cities.

Countries like the U.S. and Britain claimed to have fired over 110 Tomahawk cruise missiles, from their ships and submarines against targets in the Libyan coast, including air defense systems and strategic communication enclaves.

Likewise, French warplanes launched strikes against armored forces loyal to Qadhafi, as the Pentagon confirmed an attack by U.S. Tomahawk missile from a warship.

They are part of the international coalition that has been created to fulfill the wish of the UN and protecting the Libyan people”.

Rescate Animal: “We Give Stray Animals a Second Chance”