Rescate Animal: “We Give Stray Animals a Second Chance” 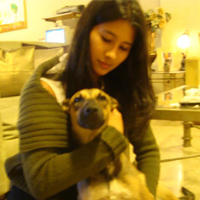 We interviewed Jordana Valverde, a young woman who has taken her love for animals to activism. She is 25 years old, she has a full time job, attends college and she is also the president of the Rescate Animal (Animal Rescue) group.

Helping animals is not a hobby for Jordana, it is a work she does with passion. Seeing a rescued puppy or kitten living happy in a home with a family that gives it love after spending months or even years wandering sick in the streets, is the reward that Jordana and her fellows from Rescate Animal receive for their efforts, they have gotten together to give a “second chance” to stray animals.

When was Rescate Animal created?

In May 2010, for incidental reasons, many independent volunteers who rescued abandoned kittens and puppies in the city of Guayaquil met and since then we always stayed in touch, giving a hand to each other. Sometimes foundations helped us providing us veterinary care, shelter and medicines and other times each rescuer looks for ways to cover the costs demanded by the case. Rescate Animal was born because of the union of these volunteers who expect nothing but to give a second chance to abandoned animals. We are formally together as a group since January 2011.

Who are the members of Rescate Animal? Is it a foundation or a group of independent animal activists?

We are a group of independent activists, who work as a team because we believe that if we unite our efforts, we will get better results. Some of our activists are also volunteers on foundations but that does not stop them from helping in our group.

How do you get funds to help animals?

Generating funds for our rescues and sterilizations is not easy, so we constantly create events, such as dessert fairs, sporting events (where teams pay their registration), flea markets, raffles and other activities. And of course, we present our rescue cases on social networks to get donations of food, money, medicine, veterinary care, temporary and permanent homes.

Do you have some kind of sponsorship?

At the moment we have no sponsorship, however, we expect the companies to expand the concept of social responsibility and join our cause by supporting Rescate Animal or other organizations that pursue the same goal: Animals’ welfare. We’re planning to seek help from the institutions and enterprises of the city in a short time.

Is it an animal shelter similar to FADA?

We don’t have an animal shelter because of our lack of resources, yet we know that a shelter is not the answer, it helps, but it’s not the solution.

We search for TEMPORARY HOMES, that’s what we do. When we rescue an animal and the vet gives releases it from the clinic (after curating it), the animal is taken to a foster home where a family takes care of it for a certain time, until its health improves and it’s are ready to be adopted.

Many of us would love to have a shelter, but we believe that shelters sometimes exacerbate the problem by creating convenience and irresponsibility in people who are thinking of getting rid of their pets because they are sick, old or have just given birth.. if they know there is a place to drop their unwanted pets, they would just leave them there without thinking much.

How are the rescued animals treated, do you have veterinary aid? What has Rescate Animal achieved since its start?

Thanks to Rescate Animal many veterinarians in the city of Guayaquil have joined our cause and they serve our rescued animals for a minimal cost and even free when possible. Doctors don’t often charge their fees when it comes to one of our patients and they help us with medicines and treatments.

Veterinarians such as Dr. Andrés Jouvin, Dr. Rafael León, Dr Diego Durán, Dra Nubia Andrade, Dr. Carlos Echeverría, Dra. Lorena Triviño, Dr. Xavier Zanabria, Dr. José Jaramillo, Dra Priscila Solano, Dr. Javier Iñiguez, among others,  are the people who make our work possible, since they’re the ones who have the knowledge, we only have the “desire” to make things right.

When we rescue an animal, we communicate with one of our doctors (usually the one who is closest to the area) to immediately treat the animal and diagnose its illness, then we start looking for donations required for the case.

How many animals are rescued on average each month?

About eight animals. If we had more volunteers, more donations and temporary homes, we could do much more. It depends mainly on the temporary homes: the more homes, the more animals we can rescue. Sometimes we have everything: medicine, money, veterinary care, but no place to leave the animals, or a families to take care of them.

Tell us a story about a pet that touched your heart and how Rescate Animal helped it. 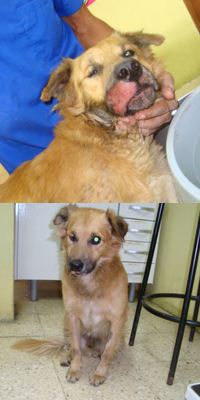 Bolo is a dog we rescued in October in Loja and Malecon. I was driving and saw this dog lying in a fetal position near a culvert on the street. I parked and approached the dog, he was shaking and his mouth was bleeding. I took him immediately to Animalópolis, a veterinary clinic.

While the doctor examined the dog, he began to convulse, as if it were a seizure, he began to have convulsions every 25 minutes.

The doctor continued cleaning and checking the puppy and then he noticed that Bolodidn’t have one of his eyes. We concluded that the dog had been brutally beaten since his face was swollen, he was bleeding and he was missing an eye. I shared the case on facebook and many people sent money for medicines and tests to the veterinary clinic.

Bolo stayed about a week in Animalópolis, where he showed a daily improvement. At first we noticed that the dog was afraid of people (a clear sign that he had been abused previously) even when I got close to him, he ducked his head and trembled, he probably thought it would hurt him, but as the days went by, we earned his trust and he left behind his “trauma”. He was eventually adopted by a family that took him temporarily at first.

He now lives happily with a family that loves him very much and have decided to give him a second chance.

Rescate Animal recently collaborated in Festival del toro event, tell us about it, dis you meet your objectives in terms of fundraising?

On Feb. 27th we participated as partners in “El Festival del Toro III” event, organized by the GPA Claudia Poppe, we were in charge of the sale of food at the event. Knowing that the proceeds would go to sterilization and rescue of animals from the street, attendees bought and tasted our products in order to help us. The result was very good, there was people who came to the event just to contact us, give us donations and some of them wanted be an active part of the Rescate Animal group.

Last Question, how can we prevent animal neglect, how can we work with foundations or organizations that seek animal welfare?

We believe that the keys are: education for children, youth and adults and the neutering of animals.

We want people to be aware about the treatment they give to animals. They sometimes forget that animals, like humans, feel cold, heat, hunger, thirst, pain, joy, the only difference is that they don’t express those emotions.

We have a project that seeks to raise awareness on responsible animal ownership, the idea is to give talks in educational institutions so that everyone is familiar with the topic.

Moreover, one of the solutions to reduce the number of stray animals is neutering our pets and prevent them from multiplying themselves. That’s why whenever there is a sterilization campaign organized by a foundation or an independent group, we support it. We also strongly oppose to the sale of animals in the streets or in pet shops, this type of business promotes increased animal populations and subsequently stray animals.

We are currently open for donations of medical supplies for the sterilizations we will do to stray animals in cooperation with our allied vets and other independent groups to try to reduce the animal overpopulation problem in the city.

In Midst of World Events, Obama Will Tour Latin America

A Major Challenge for Haiti: A New President Will Be Elected Today