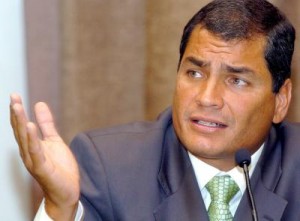 President Rafael belt sentenced yesterday in Saturday’s weekly address that he has not yet made a final decision on his reelection.

“I have not made a final decision, but I think the political circumstances have changed, my responsibility is to be in the trenches the necessary time to consolidate this process which is already a legend, to avoid going back fifteen years in the past,” said Rafael Correa in reference to the results of February 23.

Among the reasons for a change in the Constitution he stated: “To avoid back fifteen years in the past, to avoid the corrupt banking, those corrupt politicians, the corrupt press that is still present. That is one factor that leads me to reconsider my decision, when I see the mediocrity of the national press. “