According to the IMF, the biggest challenges for Ecuador are the deficit and debt 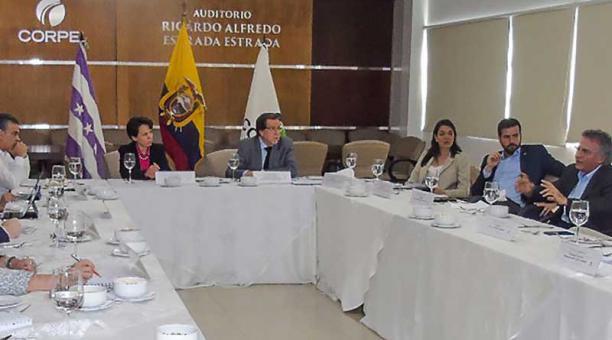 After 15 days in the country, the visit of the International Monetary Fund (IMF) ended on Wednesday, July 4, 2018. The technical group gathered economic information from authorities, analysts and productive guilds, within the framework of the Article IV Consultation process.

In Washington, the final report will be prepared. In a preliminary way, the entity announced, yesterday in a statement, that it identified two main challenges that the country must face: the level of public debt and the growth of the fiscal deficit.

According to the multilateral, Ecuador is still accommodating to the external shocks that have exposed the underlying structural imbalances in the economy. These external shocks have to do with the fall in oil prices, which have not returned to mark the levels reached in 2014. To this is added the appreciation of the dollar, which has reduced competitiveness to exports, and the rise in prices interest rates in the United States.

The latter increased the financing for countries like Ecuador. According to Ana Ivanova, head of Mission of the IMF, although the Government has taken important steps, “the deficit is still great, particularly for a dollarized economy”. The Government acknowledged that the income-expenditure gap must be adjusted; and in line with this, it proposed measures in the bill for Productive Development.

The reform proposes to achieve primary fiscal balance until 2021; that is, reduce the deficit to zero, so that the income is sufficient to cover the expenses (without taking into account the payment of interest on the debt). The deficit is projected at 5.3% of GDP for 2018. The IMF highlighted the reform, but believes that it could have greater refinements. Similarly, the multilateral considered that the recovery of the price of oil, cuts in capital spending and the freezing of hiring will help reduce the deficit, but urged the Government to take measures “more balanced and anticipated.”

A week ago, Finance ruled out a new bond issue due to the increase in country risk. However, the indicator was reduced these days and yesterday closed at 689 points. According to analysts, Ecuador would be closer and closer to seeking an agreement with the multilateral.

A report by rating agency JP Morgan indicates that in the next three or six months, the country could seek help from the entity. The Government has not formally stated an intention to request resources. Looking ahead, the agency said authorities should “keep the course of quick and decisive actions to address the vulnerabilities of the economy.”

The document also notes that the country must work more on competitiveness. He suggested reducing the rigidity of the labor market, more trade agreements, etc. The economic entity highlighted the health of the financial sector.

A credit of the Flar

The Ministry of Finance said, yesterday, that the Government subscribed this weekend a credit agreement for USD 368.8 million with the Latin American Reserve Fund (Flar). These resources are part of the financing planning 2018.

The loan, which will be disbursed in these days, has a payment term of three years, with a grace year, and its interest rate is three months plus 326 percentage points; that is, approximately 5.36%.

The agreement was signed this June 30, in Bogotá, by the Minister of Finance, Richard Martínez; the manager of the Central Bank, Verónica Artola, and the president of the Flar, José Darío Uribe.

In 2008, the previous Regime stopped participating in the realization of Article IV. In 2014 it was resumed, before Ecuador reissued bonds. Then, the consultation was done through videoconferences. (I)