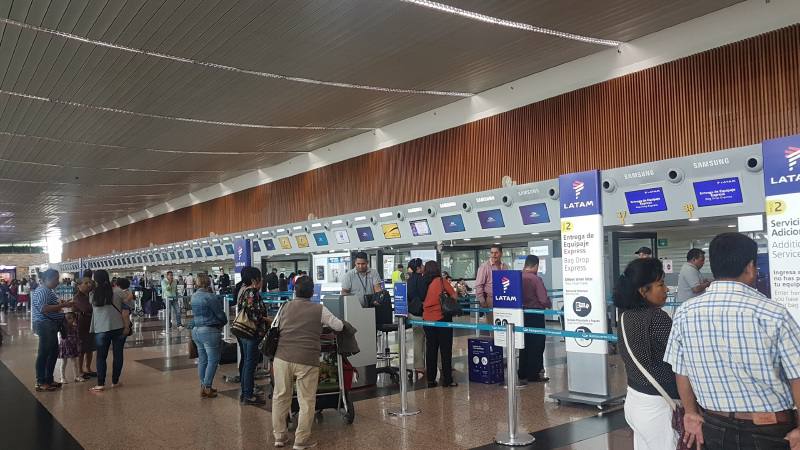 The billboard advertising the Pedro Menendez Avenue new airport in the area of Daular for 2024 was withdrawn. In its place was placed another with the awards achieved by the air terminal managed by Tagsa.

The change coincided with the diffusion of wedges in which it is explained that the new terminal will be built as determined by passenger traffic. There is no talk of 2024 to have the first stage of the Daular airport.

A scenario that reflects a drop in passengers disrupts Guayaquil’s plans to have a new air terminal within six years and, therefore, the idea of developing a new city on the current premises of José Joaquín de Olmedo.

The concession contract, which must end in 2024, sets a figure of ‘triggering event’, which implies that to make way for the new airport it must reach 3.5 million passengers in departures, arrivals and international transit.

Statements by Nicolás Romero, manager of the Airport Authority of Guayaquil.

Nicolás Romero, manager of the Airport Authority of Guayaquil (AAG), municipal entity that oversees the concession, recognizes that it will not be possible to specify the Daular airport by 2024, since it estimates that by 2021 it would be possible to recover the 2011 level.

What happened so that Guayaquil has lost so many passengers?

Ángel Córdova, manager of the concessionaire Tagsa, explains that the fall is in the domestic market, since in the international register an increase, although not in the desired levels.

“The problem is not the airport, but external factors,” says Cordova, adding that the withdrawal of the fuel subsidy provided by the previous government made the tickets more expensive and the economic situation made it less traveled, even that was felt in the sector public.

Tagsa and the AAG allege that with the opening of the airport in Tababela they felt a drop in passengers between Quito and Guayaquil. Romero believes that in the remoteness of these facilities there are users who choose to move by land.

But Romero notes that the fall of passengers is not only in Guayaquil, but also felt by Quito.

A report by the consultancy Leigh Fisher on the market in Latin America maintains that since 2011 there has been a significant reduction in passenger traffic in Quito and Guayaquil.

With fewer passengers flying on domestic routes, airlines adjusted their flights. In recent years, Guayaquil lost flights that Tame made to Esmeraldas, Latacunga and recently to Cuenca. At an international level, it no longer has Tame direct to New York or the route from Latam to Miami. Iberia, although it has offices in the city, stopped flying to Madrid from Guayaquil and moved passengers from Quito. Air Europa, which began flying between Madrid and Guayaquil, now makes a stop in Quito.

Romero maintains that these are decisions that airlines make, because Guayaquil offers incentives for those that open new routes.

In fact, he points out that Air Europa had them, but they were withdrawn when they began to stop in Quito.

The Airport Authority notes that Declan Ryan, of Ryan Air, showed interest in flying to Guayaquil through Viva Air. This could be specified in October. Tagsa reports that Avianca has an interest in Buenos Aires.

The last airline that entered Guayaquil is Spirit, which flies to Fort Lauderdale. But Delta, United, Aeroméxico and JetBlue do not arrive here like in Quito. (I)