Activist sentenced for insulting President Correa is coming out of prison 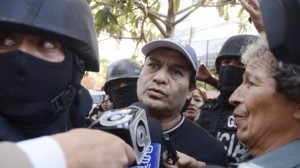 Activist Carlos Figueroa is prepared for his release next January 21, date when the sentence he is serving meets, for insulting President Rafael Correa, while the defense of the former assemblyman Cléver Jimenez and his former advisor Fernando Villavicencio, announced he will raise the prescription of the sentence, which is met on March 21.

The sentence was derived from the process raised against the head of state for an alleged crime against humanity, whichaccording to them, would have been set up on September 30, 2010, during the police uprising, when the President allegedlyordered shooting towards the Police Hospital. The complaint was dismissed and Correa’s countersued them for defamation.

Figueroa’s lawyer, Julio César Sarango, insisted that his client is a victim of political persecution and despite the sadness bythe death of his ailing mother-to whom he could not say goodbye- “he is motivated because when released from prison hewill continue in the fight for his rights and of Ecuadorians.”