Adjustment in funds cause critics from Majors 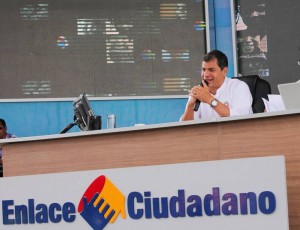 Last Saturday, President Rafael Correa announced that the government will not continue funding competences assigned to Autonomous Decentralized Governments.(GAD for its Spanish acronym). These declarations generated reactions from different Mayors, who criticize the measure mentioned in the Weekly Address.

Correa said he would withdraw the extra funds that are assigned to some cities, through the State Bank credits or direct subsidies.

“The central government has its own obligations, while local governments receive $ 270 million in additional transfers to what the law requires”, he said.

The president pointed out as examples the Quito subway and the Cuenca tram, cities where the ruling party lost in the last mayoral election.

The Mayor of Cuenca, Marcelo Cabrera, said that besides what the Organic Code of Land Management (COOTAD for its Spanish acronym) orders, the council does not receive extra contributions from the Government. He asserts that the city has always been characterized by “the self-management”.

Domenica Tabacchi, Deputy Mayor of Guayaquil, said that the city will not be affected by this measure, but criticized that those resources are removed to other cantons. “They want to punish cities that receive this support because they lost elections there, they want to take that away from them”.