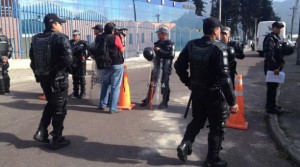 225 policemen are accused of sabotage and terrorism for interrupting a public service in the old airport Mariscal Sucre of Quito. This would be another judicial process for police revolt in September 30, 2010, which began yesterday.

The audience of the trial and formulation of the opinion against the defendants was declared as reserved. This caused the occupation of the streets around the sixth court Criminal Guarantees, located in the House of Justice of Quito. The access was allowed only to the Lawyer and his client.

Lawyer Patrick Armijos criticized the inequality in the treatment. According to him, Prosecutor Iván Ron had all the facilities to enter with his work team, the defendants did not have the same luck. The defendants include 130 members of the Air Force of Ecuador.