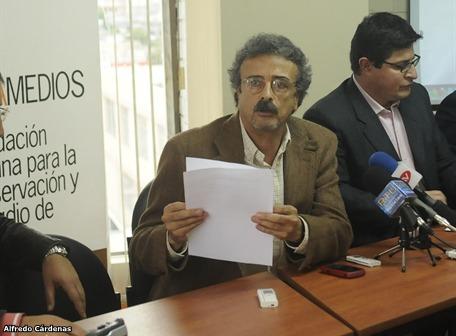 Diego Cornejo Machado from the AEDEP.

The Ecuadorian Association of Newspaper Publishers (AEDEP for its Spanish acronym) has rejected the submitted exhort made last Wednesday by the Council for the Regulation and Development of Information and Communication (CORDICOM for its Spanish acronym) regarding the journalism treatment on the project debates of the draft Monetary Financial Code.

In the exhort, the Cordicom urged the media, especially the press, to have an “ethical” treatment of the subject and expressed their concern on some journalists “misinforming” the draft code.

On his behalf, Executive Director of the AEDEP, Diego Cornejo Menacho, through a statement, expressed that the so-called exhort from Cordicom was nothing but a “veiled call to the media to exercise prior censorship on Information and opinions related to this topic.”

Cornejo recalled that censorship is expressly prohibited by the Constitution of Ecuador and is also in the international conventions, to which Ecuador is subscribed, as the Declaration of Chapultepec. “Censorship violates human rights,” said Cornejo.