After 11 years, The Dolores declared yesterday 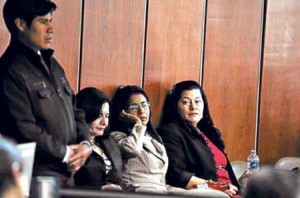 After giving testimony before the National Court, The Dolores asked for justice.

After 11 years, Dolores Velez and Dolores Briones, could finally declare yesterday in Quito, before the National Court of Justice.

The Dolores appeared to give their testimony at the request of the Attorney General of the State in the trial against eleven police officers, for killings during a police operation in November 2003, at a pharmacy in la Alborada in Guayaquil, who left 8 dead and 4 missing people.

Dolores Velez stated what she has insistently repeated to the media since 2003, that her husband Carlos Andrade left past 06:30 to buy bread, milk and diapers for her daughter, and when noticing that several hours after her husband did not return, she went out to look for him, finding out that a shooting had occurred in the pharmacy where he had gone.

Velez described how the police denied the information and tried to implicate her husband in the band of assailants who allegedly entered the establishment. “The autopsy report revealed that the body of Carlos presented 11 bullet holes”, she said.

Dolores Briones, wife of the Messenger of the pharmacy, narrated that she knew of the the death of her husband Guimer Cordova from the news. “How is it possible that they have shot him in the back of his neck while he was face down. They cowardly turned his body back  and put near him a bag of money and a knife”, she said outraged before the court.