After 16 years of the explosion, families refuse to forget the deaths in Coca Codo 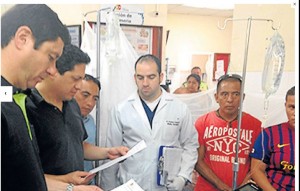 On the night of December 13, 2014, in an “explosion” they killed 14 workers, 11 Ecuadorians and 3 Chinese who worked on the construction of the Coca Codo Sinclair hydroelectric plant, located between the provinces of Napo and Sucumbios.

Almost 16 months of the incident, relatives of three of Ecuadorian victims still not clear what exactly happened that day. Luis Moya lost his son Felix; Lidia Chongo Amelia Shiguango and their husbands, and Ramon Bayron. The three believe the Chinese contractor Sinohydro has responsibility for their deaths caused by the collapse of part of a pressure pipe in the work

A little optimism for the construction of port

The toxic legacy of the gold rush