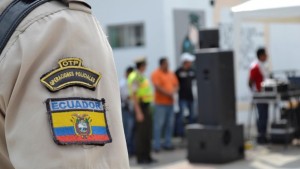 The ‘cleaning’ reached the police headquarters of Manabi. Thirty-seven agents were dismissed from the institution for alleged indiscipline; while five others were arrested for alleged links to a dangerous criminal gang, which is responsible for about fifty murders.

The latter were handcuffed yesterday morning, while taking part in the formation of the Pedernales Police Detachment, reported the Attorney General.