After his concert, Miguel Bose had lunch with Rafael Correa and local artists 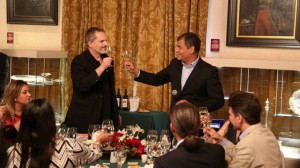 Spanish singer Miguel Bose made a short break from his international tour Amo Tour to have lunch Friday with President Rafael Correa, accompanied by Ecuadorian artists and ministers.

On Wednesday, through his social networks, the president invited his followers to participate in a contest so two people can attend this lunch, which took place in the Banquet Hall of the Carondelet Palace, in Quito. Public Radio, on its Twitter account, reported yesterday that Alicia Hidalgo and Erika Vaca were the winners, but Friday it published photos of three guests.

Besides them, lunch was attended by artists like La Vivi Parra and Wendy Vera; Culture Minister Guillaume Long, among others.
At 12:40 Bose met with President Correa in the Hall of Protocols of the Palace. The hearing was private. Almost an hour later, at 13:30, the lunch started, which was also attended by part of the production staff of the National Geographic documentary that was filmed in Galapagos, in December, including marine ecologist Enric Sala. (I)
Source: http://www.eluniverso.com/vida-estilo/2016/02/12/nota/5399776/despues-concierto-miguel-bose-almorzo-rafael-correa-artistas