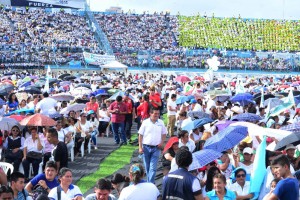 Teachers from all over the country yesterday filled the stands and the pitch of the Estadio Modelo Alberto Spencer stadium on the occasion of the first anniversary of the Network of Teachers of Ecuador and to listen to President Rafael Correa.

Among the speeches about education and progress, the most applauded was the presidential offer of a possible rise in salaries for teachers as long as resources are available.

“Our teachers have to be the middle class and for that we must continue to raise salaries, we have not had a lack of desire, but of possibilities, but I will do it soon,” stressed the president and said that 90% of teachers have signed long term contracts.

And after speaking of education he mentioned the Institute of Social Security of the Armed Forces (ISSFA) and his disagreement on the legal dispute.

“Guayaquil people, you must know that a trial means the cancellation of the contract, and the the Samanes Park would pass into the ISSFA hands.” (I)
Source: http://www.eluniverso.com/noticias/2016/02/14/nota/5401900/correa-dice-que-juicio-parque-samanes-iria-issfa

After his concert, Miguel Bose had lunch with Rafael Correa and local artists