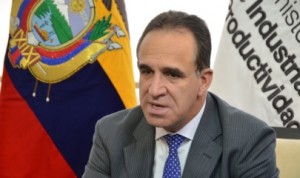 The application of safeguard measures by balance of payments will not affect the process of signing and approval of the Ecuador´s trade agreement with the European Union (EU). This was stated by the Minister of Industries, Ramiro Gonzalez.

President Rafael Correa announced a month ago he will apply, in late February, a general measure to face the impact on the economy by the falling of oil prices and the appreciation of the dollar. This measure, Gonzalez said, is of a general nature and has no exceptions, this means that the additional fee will apply for all countries, including the European Union, with which Ecuador closed the negotiation of a trade agreement last July.

In addition, the new measure is not contrary to Resolution 42 of the Committee of Foreign Trade (Comex), effective since December 29, 2014.