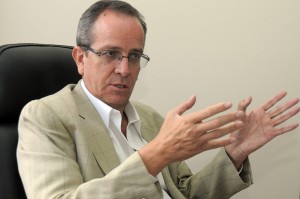 The former president of the Constituent Assembly, Alberto Acosta, responded to President Rafael Correa, who in his last weekly address said he was remorseful for being persuaded by Acosta to include the “right to resistance” in the Constitution of Montecristi in 2008.

Through his Twitter account, Acosta defended this right that is found in section 98 of the Constitution, and labeled Correa as a leader. “The right to resistance against actions or omissions of the public power is a democratic achievement and not an innovation.”

But according to Correa, “this was a gadget of Acosta, a 60-year old boy who said to me: Let us put the right to resistance. I said you’re crazy, knowing about certain leaders, this will serve so opponents do anything and besides this is already in international treaties; but he said to me, let’s put it,” said the president last Saturday.

Acosta wrote that “Correa in his arrogance, believes he was in charge of drafting the Constitution. He does not understand that it was a collective democratic exercise.”

He accused the president of putting his hand in justice: “The leader put his hand on justice, proposed amendments, he does not feel comfortable with Rights.” (sic).

“Who hit the barracks door? CORREA; Who hits Constitution? CORREA: Who is a coup leader? CORREA #EcuadorUnitedInResistance.”