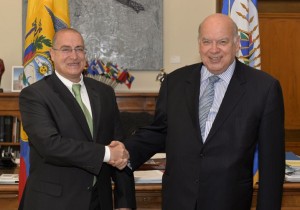 The Ecuadorian Ambassador to the OAS, Marco Albuja, responded to José Miguel Insulza, regarding his rejection to the Ecuadorian proposal to change the headquarters of the Inter-American Commission on Human Rights (IACHR), which is currently located in Washington.

“The opinion of the Secretary General of the OAS reflects only his thought and does not commit the organization … Only the opinion of States, expressed through deliberations and voting, determines the course of the OAS (Organization of American States ) and the IHRS (Inter-American Human Rights System). ”

Albuja indicated that the “unique role of the Secretary General is complying with the provisions of States… If the States democratically decide to change IACHR headquarters or not, it shall correspond to the Secretary of the OAS to only comply.”