Alexis Mera described as “insolent” the Archbishop of Guayaquil 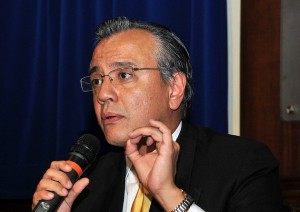 The legal Secretary of the Presidency of the Republic, Alexis Mera, Thursday labeled as “insolent messenger of the right” the bishop of Guayaquil Monsignor Antonio Arregui, who in recent days said that the Dialogue convened by the government of Rafael Correa should “recover credibility.”

In an interview with Ecuavisa, Arregui, Archbishop of Guayaquil, said it is “imperative a gesture” to confirm the intention of the government of listening to all sectors.”

This is not true for Mera. “The dialogue is that, dialogues. Here is said that the government does not want to talk, we even see that the bishop of Guayaquil, insolent messenger of the right, who in his own behalf, says that government does not dialogue, he is the one that should talk to homosexuals, he says are good for nothing, the government has dialogued and is in the process of dialogue and obviously we are discussing these issues,” said the official before his entry into the presidential cabinet meeting.