Alexis Mera was taken to jail; 9 more orders must be fulfilled

Alexis Mera was holding a black backpack in her left hand. He was protected with a helmet and bulletproof vest. 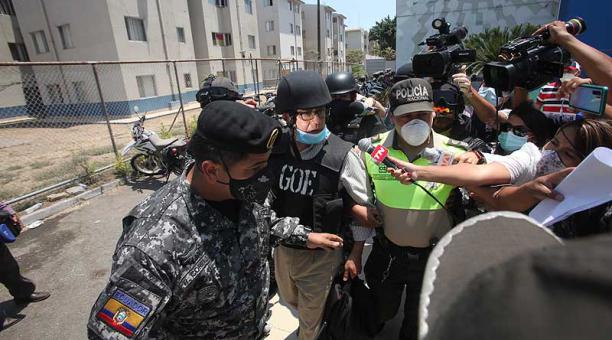 Alexis Mera was taken to jail; 9 more orders must be fulfilled

That left the building of the Judicial Police of Guayaquil and walked to a police car.

After noon yesterday, September 24, 2020, and once he was medically evaluated, the agents of the Special Operations Group (GOE) transferred him to the Cotopaxi prison , to serve the eight-year sentence for the Bribery case. 2012-2016.

Before leaving, he said that he was the victim of political persecution and that he was imprisoned for his ideas. “The persecution has made me face jail and I will do so with honor. For me, jail is an honor ”. The policemen quickened their pace.

Hours earlier, the former legal secretary of Correísmo left his home, where he had been under house arrest since July 6, 2019.

The order for his transfer is recorded in the execution of the sentence , which has been in effect since Wednesday, September 23. There are 10 actions, which judges Iván León, Iván Saquicela and Marco Rodríguez ordered that they be carried out.

The magistrates ordered the search and capture of former President Rafael Correa and 17 other convicts .

The document also calls for the arrest of former Vice President Jorge Glas , but he is already incarcerated in the Cotopaxi prison, where he is serving a sentence for illicit association in the Odebrecht case .

The former Minister of Public Works María de los Ángeles Duarte has been at the Argentine Embassy in Ecuador since August 13.

Romo denied any possibility that the former official could leave the country through diplomatic channels. “In no way does the Ecuadorian State intend to authorize his departure from the Embassy . If a safe-conduct is required, it will not be granted, because it seems to us an abuse of this type of asylum… It will remain there and the other option is to comply with the law ”.

In the case of Rafael Correa, Ecuador will present an arrest warrant to Interpol .

On July 31, the Commission for the Control of Files of the International Police did not give way to the request to update information on the ex-president’s red diffusion .

The observation was that there was no “ additional information ” on the case and because other requirements were not met .

Among the actions ordered by the judges there is also the beginning of the process for the sentenced to pay USD 14.7 million as comprehensive reparation .

Pablo Encalada, lawyer for businessman Rafael Córdova, indicated that his client ordered him to send a letter to the Court to indicate that he is willing to face the economic penalty. The lawyer confirmed that his client is outside the country and that he does not plan to return to serve his prison sentence, as he warns that there are no guarantees.

According to the ruling, the provision must be fulfilled within 30 days after the execution of the process. For this reason, the Attorney General’s Office , on behalf of the State, was ordered to provide the Court with the account number in which the deposits should be made .

Paúl Ocaña, lawyer for businessman Teodoro Calle, indicated yesterday, September 24, that after the final ruling they are waiting for that.

He said that his client will pay by certified check and that he is in Ecuador. He recommended that he not turn himself in, as a request for a review is pending in the Court.

In the afternoon, the Attorney General’s Office indicated that it had delivered that account number for the respective transfers.

Instead, on September 16, the 82-year-old businessman Pedro Verduga filed a document with the Court and announced that he would appear “voluntarily to serve his sentence.”

In the sentence there is a judicial provision for the confiscation of real estate of all the accused. This is to ensure that they comply with the economic restitution .

While that happens, the Police are tracking former Minister Vinicio Alvarado , former Secretary of Water Walter Solís (would be in the US), Assemblywoman Viviana Bonilla and former parliamentarian Christian Viteri . The same happens with the businessmen Mateo Choi and William Phillips.

The Bribery case exploded in May 2019; Pamela Martínez and Laura Terán were the first to be arrested. In April 2020, the Court of the Court issued the penalty of eight years for bribery. An appeal was later denied. After the appeal, the ruling was finalized on Tuesday.

International banana forum will analyze the sustainability of the market