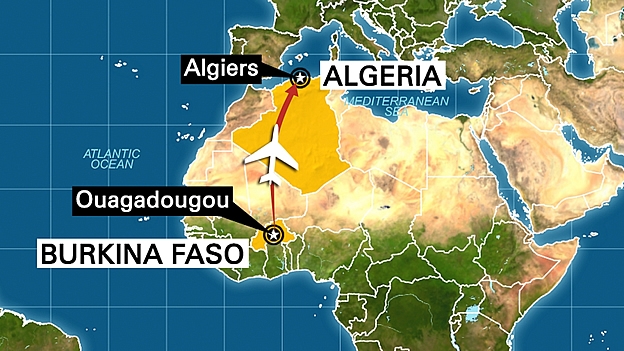 Airplane AH5017, operated by Air Algérie disappeared this Thursday July, 24. The same that was traveling between Ouagadougou, capital of Burkina Faso, and Algiers, capital of Algeria. 110 passengers and six crew members were aboard, according to company officials.

According to sources of Algerian Aviation, contact was lost with the aircraft 50 minutes after taking off from Burkina Faso.

A few minutes ago, an Algerian aviation official told Reuters news agency that the plane has crashed . “I can confirm that has crashed,” the official said, declining to give details of the aircraft whereabouts or the cause of the accident.

Sources of the Spanish Airlines Pilots Trade Union (Sepla for its Spanish acronym), confirmed that the crew is Spanish: the two pilots and the four cabin crew members.

On the flight were: 51 French, 24 Burkinabes, 8 Lebanese, 6 Algerians, five Canadians and 4 Germans, among other nationalities, today reported the Algerian company.

According to the Foreign Ministry of France, the flight disappeared from radar while flying over the north of Mali, a conflict zone. However, a senior official from the same country denied that active rebels in the area have the capacity to bring down a plane.

However, a BBC correspondent in Ouagadougou, Thomas Fessy, said that the pilot contacted with the control tower to report a change of course due to a storm.

The plane, currently rented by the Spanish company Swift Air and operated by Air Algérie, took off from Ouagadougou at 01:17 hours and was scheduled to reach Algiers at 05.10 GMT. The apparatus has a wingspan of 33 meters and a cruising speed of 800 kilometers per hour.

Guayaquil is celebrating: activities for today