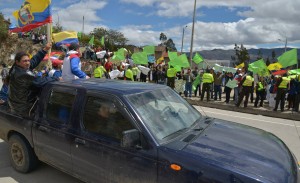 At the entrance to the city of Cuenca, in the Azuay province, demonstrators of indigenous movements were met with a sit-in of Alianza PAIS.

The demonstrators had planned to stop in Oña, the first settlement between the provincial boundaries of Loja and Azuay, but they had to take longer because a group of people with flags of Alianza País was installed there.

But the march did not stop to keep from falling “in the provocation” of the ruling party. Alianza PAIS leader of the Ponce Enriquez county, Baldor Bermeo, stated that his intention was not to create incidents, but to show support to the current government.

Before entering to Oña, the truck carrying food for the marchers damaged. And while waiting for the arrival of the rest of the caravan, the occupants noticed the presence of a man approaching and could not explain what he intended.

Then he tried to run and was detained by the protesters who accused him of trying to manipulate the food. The police had to intervene and keep the individual away from the crowd. The incident did not lead to serious consequences.