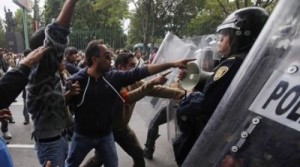 The former chief of police of Cocula, the Mexican town where according to witnesses statements, the Ayotzinapa students were massacred, was arrested for allegedly participating in the delivery of the youth to a criminal organization, prosecutors said on Friday, November 21.

On November 16 was recorded “the capture of César Nava González, former deputy police chief of Cocula, Guerrero, member of the criminal organization self-called Guerreros Unidos (United Warriors for its English name),” said the Prosecutor’s office in a press release.

The arrest was notified to the parents of the 43 missing students during a briefing with senior Mexican officials.