The Alliance for Children and Adolescents of Ecuador prepared a letter, which will be sent to the Ethics Committee of the National Assembly. It demands the evaluation and punishment of the behavior of Assemblywomen Pierina Correa and Geraldine Weber, of UNES and PSC. Both participated in an event organized on Monday, June 28, 2021 by anti-rights groups, in Guayaquil. 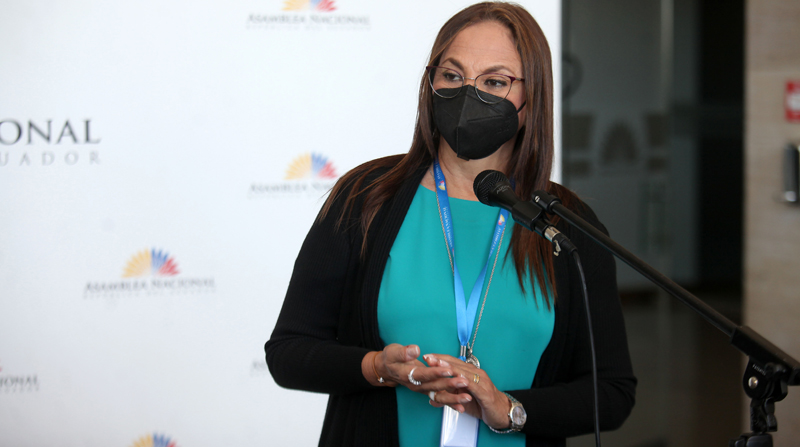 Pierina Correa is the president of the Assembly’s Commission for the Comprehensive Protection of Children and Adolescents.

The meeting took place on the same day that the Ombudsman’s Office presented to the National Assembly the bill to guarantee the right to voluntary interruption of pregnancy for victims of rape, as ordered by the Constitutional Court in its ruling to decriminalize abortion in this case.

That day, at the event attended by both assemblywomen, Legislator Correa signed a document, promoted by organizations that call themselves pro-life. The act involved a girl who was sexually abused with her baby.

For this reason, the Alliance for Children and Adolescents recalled that this fact constitutes a violation of the rights to honor, personal and family privacy and the image of this mother and her son, “who were photographed and videotaped at this event,” says the letter that will be sent to the Legislature.

Article 52 of the Children and Adolescents Code prohibits the publication and display of images, recordings or written references that allow the identification or identification of a child or adolescent who has been the victim of ill-treatment, sexual abuse or criminal offences, and any reference to the environment in which they are developed.

The Alliance also states in its letter that there is an aggravating factor, given that Pierina Correa is the president of the Assembly’s Commission for the Comprehensive Protection of Children and Adolescents, so “it is her obligation to know their rights and ensure that they are not violated.”

Therefore, in addition to the sanction against the revictimization committed on both child victims of violence, the organization for the rights of children asks the members of the permanent commission led by Correa to withdraw their support for the assemblywoman and to choose another representative “who legislates with knowledge and neutrality, not from preconceptions of a dystopian nature and less from spiritual or religious affinities.”

The representative of the Alliance for Children, Sybel Martinez, said that between June 29 and 30 the letter already has more than 100 signatures and that they continue to collect them. The Ethics Committee, he said, requires the complaint of an assemblyman and 14 others to support it. “We hope they will be consistent.”

In a secular country like Ecuador, Martinez said, “it is disturbing that personal beliefs are used to deny the minimum human decency to women and girls, which is their right to decide.”

Lawyer and activist Ana Cristina Vera pointed out that it is necessary to separate personal positions from non-compliance with the law and the decisions of legitimate authorities. In addition, he recalled that the decriminalization of abortion for rape is immediately applicable, so all health services must be providing this service.

“Assembly members should know that passing the law to guarantee the right to abortion for rape victims is not elective. The Constitutional Court did not ask them if they want to do it, but ordered them to do so, so it ruled. An assemblyman who violates the rule must be removed from office.”

The Council for the Protection of Rights of the Metropolitan District of Quito issued a statement on June 30, 2021. He recalled that “the rulings of the Constitutional Court constitute binding jurisprudence to promote the exercise of rights and materialize the spirit of guarantee of our Constitution, so that it is the duty of the assemblymen of the country to respect the mandates of the Court, obstructing them not only that it undermines the effective exercise of rights, but could also have repercussions of a legal nature by failing to comply with a legitimate and express order of competent authority.”

In the same way, the Council pointed out, “it is important to point out that all political actors, regardless of the tendency to which they subscribe, must respect the secular character of the Ecuadorian State, remembering that personal positions and opinions regarding a public health problem, such as abortion in cases of rape, cannot be mixed with the functions and competences for which they have been elected and elected.”

In this context, the Quito Council for the Protection of Rights stated that:

“Itrejects the actions of Assemblywomen Weber and Correa, as well as the statements issued by the latter, who in her capacity as President of the Commission for the Comprehensive Protection of Children and Adolescents of the National Assembly has an inescapable obligation to guarantee, promote and protect the rights of this group of priority attention, regardless of spiritual or religious affinities. While recalling the obligation of legislators to respect the rules and laws of the national legal system.”

“It requests the Constitutional Court to rule on the obligation to comply with its rulings, regardless of positions, dogmas, religious and moral beliefs, or any other personal situation contrary to the precepts of the Constitutional State of rights.”

“It urges the National Assembly to analyze and follow the relevant administrative procedures in relation to the actions of the assemblywomen in question, which are incompatible with the exercise of their functions as legislators.”

“It demands that Assemblywomen Weber and Correa, and all social groups that are against abortion, refrain from carrying out acts that violate the rights of children and adolescents by exposing them to activities for political purposes, even less so if they are children or adolescents who are victims of sexual violence.”

“It urges all public institutions, and citizens in general, to respect the decision of the Constitutional Court because, in a constitutional framework of rights, its decisions are binding and binding jurisprudence.”

Sugarcane and ethanol production generates 200,000 jobs, according to the Biofuels Association of Ecuador