The house of Manuel Palacios, 69, is one story. The small construction welcomes 11 members of his family . The economic situation of this head of household was complicated by the pandemic and he cannot find a job. 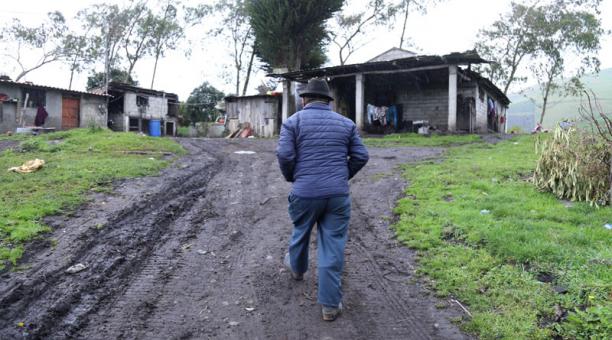 The house, with block walls and a zinc roof, is on a hill in the Lindero community , in the Pilahuín parish , located 45 minutes south of Ambato , in Tungurahua .

The expenses of this family were financed with the daily sale of the 25 liters of milk produced by their two cows . “Before the covid-19 they paid us USD 0.39 cents a liter, but now it has dropped to 0.32 and we are almost not enough what we receive.”

The agriculture contributes little or nothing in income. In mid-2020, Manuel planted potatoes, but the quintal fell in price and they only paid him USD 6 for each one. The sale was not enough to cover the investment, says Manuel, with regret.

Since October last year, Palacios has received a USD 100 voucher from the Ministry of Inclusion. With the resources, he cancels the Internet service that he hired so that his daughter can study. Also the basic services of piped water, electricity and a part for food. “A month I manage to complete USD 400, but“ it is not enough because the family is large ”.

With that income, Manuel only has to allocate USD 1.26 a day for the food and care of each of his children and his wife . That puts this household on the poverty line, which affects almost half of the rural population.

In the country, 32 out of 100 Ecuadorians were in this situation in 2020, but in the countryside there are 48 out of 100. A person is considered to have this condition when they earn less than USD 2.8 a day.

The indicator skyrocketed in relation to 2019, when 42 out of 100 people who lived in the countryside received that income or less.

Lack of resources brings other problems for this segment of the population.

Segundo Baltazar, director in charge of the Víctor Manuel Garcés Intercultural Educational Unit, explains that the pandemic affected the economy of the families of the four communities in the southern part of the Pilahuín parish : Lindero , Yatzaputzán , Río Blanco and Totora .

The teacher says that there is a 30% absenteeism of students in virtual classes, because their parents do not have to pay for the Internet or because the service does not reach the area where their homes are. Children who are in this situation attend on Wednesdays and Fridays to receive pedagogical support from their teachers.

The little girls María and Doménica, who live in the rural parish of Alluriquín, in Santo Domingo de los Tsáchilas , also stopped attending the school’s virtual classes, because at home there is no Internet and they do not have the resources to move to the center of their life. parish, where there are local computers.

At home, breakfast or a snack is sacrificed , depending on the day, given the crisis that has hit this family for more than a year. Juan Ordóñez, the girls’ father, has been a panela seller for a decade. In April 2020, he became ill with covid-19, his health condition worsened and he was hospitalized for about a month. The 48-year-old man was the one who financially supported his two daughters and his wife, Julia Cedeño.

The days of confinement, in a hospital in Santo Domingo, were critical not only because his condition worsened, but because the home invested its few savings in Juan’s treatment.

They needed up to USD 300 a day to pay for the medicines . But it was not enough and they had to sell the television, part of the furniture and some work tools.

They are in debt, the interests are growing and they cannot pay them, says Juan, who is still recovering from the ravages left by the virus . He barely makes $ 5 a day, selling panela on the street.

To get a little more income, others choose to look for opportunities in the city. Gloria Checa travels from her home, located in the rural parish of La Esperanza , on the slopes of the Imbabura volcano, to Ibarra, to work from Monday to Friday. On a sidewalk in the center of the city, he places a metal cart in which he offers sweets and cigarettes.

This 75-year-old woman, who has dedicated 20 to this activity, remembers that before March 2020 – when the health crisis began – her income was around USD 8 a day. Currently, the average is $ 2.50 each day.

With the USD 50 that he collects per month, he pays USD 8 for electricity service and USD 4 for drinking water. The rest she invests in buying products for her business and food for herself, her daughter and five grandchildren, with whom she lives. “With this job I educated my four children. But now most of the customers stopped buying the products . There is mistrust about the virus, ”he says, while arranging the candies and chocolates .

The pandemic has different economic impacts in Imbabura. Before the covid, Cotacachi was the canton with the highest rate of people living in poverty.

But the crisis hit commerce and tourism in Otavalo , Ibarra and Antonio Ante , explains Sherman Ortega, director of Productive Development for the Imbabura Prefecture.

On the other hand, the cantons that live from agricultural activities, such as Pimampiro and Urcuquí , had some respite, because the demand for food continued.

Faced with the crisis, the National Government created, the previous year, the family protection bonus of USD 120. This is given only once to families who are in the range of poverty and extreme poverty and do not receive a pension or other state bonus. In Imbabura, in the third phase that is underway, 7,407 families will benefit.