Some 32 videos aimed at female candidates with 1,854 comments, of which 25 showed some sign of gender violence. Only 20 articles out of a total of 110 published provide a space for candidates for the Presidency or Vice-presidency. Two of the fifteen candidates monitored are the target of attacks through memes, images, expressions and phrases on social networks. 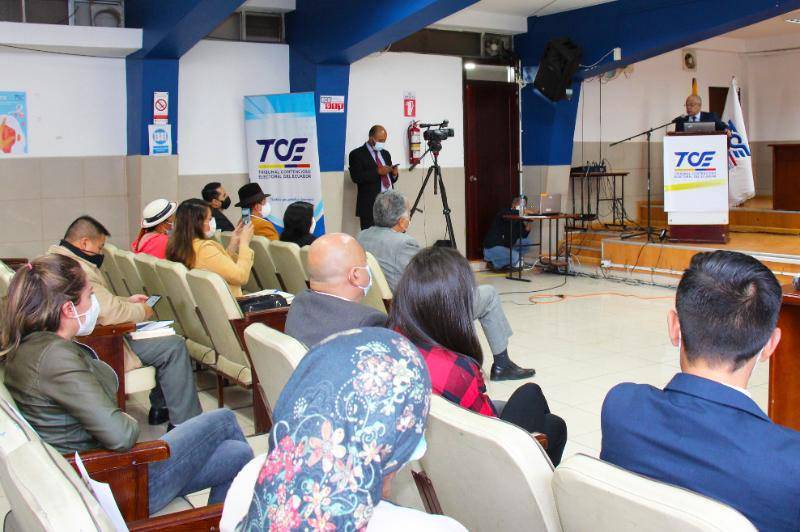 The figures are part of the results obtained from the monitoring of various organizations, such as the Corporation for Citizen Participation, the National Observatory of Political Participation of Women and the Movement of Women for Justice, before and during the electoral campaign for candidates, and that, as they point out, reveal an increase in political violence against women.

As of February 3, 2020, the reforms to the Democracy Code entered into force, whose article 280 conceptualizes political gender violence as “that aggression committed by a person or group of people, directly or indirectly, against women candidates. , militants, elected, appointed or holding public office, human rights defenders, feminists, political or social leaders, or against their family ”.

Committing acts of political gender violence is considered a very serious electoral offense. The law establishes thirteen grounds, among them, to disclose images or messages that reveal information about women in exercise of their political rights, by any physical or virtual means, in electoral political propaganda or in any other that, based on gender stereotypes, transmit or reproduce relations of domination, inequality and discrimination against women.

Only three complaints are in the Electoral Court

The Contentious Electoral Tribunal (TCE) has among its powers to establish sanctions with a fine from 21 to 70 unified basic salaries, that is, from $ 8,400 to $ 28,000. There are only three complaints about alleged political gender violence, one of these was archived. This low number of cases that are processed in the electoral justice system contrasts with the monitoring carried out by these organizations on social networks and in the media.

Ruth Hidalgo, director of the Citizen Participation Corporation, says that this electoral campaign has evidenced a sustained presence of this phenomenon, which is causing a disincentive for women to participate in politics and the loss of spaces in which decisions are made of public policy or the Legislature.

It states that civic campaigns are no longer enough, so after the elections they want to organize working groups to be able to discuss this phenomenon with opinion leaders, academies, organized civil society, authorities and political parties.

For Hidalgo, this celebration of March 8, International Women’s Day, should lead the State and society to raise a list of pending issues with women.

Within its monitoring of political gender violence, the Corporation also registers, for example, 7,822 tweets with 704 expressions with a discriminatory meaning and 1,268 phrases to women, whether they are public officials, journalists or public figures.

The monitoring of social networks is carried out with its own methodology on five types: if women receive threats of physical harm; if they are harassed; if they have intimidation and abuse, verbal or symbolic; gender misinformation; and defamation or fake news .

One of the latest follow-ups carried out by this Observatory, from January 15 to 24 of the Facebook publications of the different national media, discovered an increase of 14% in gender attacks against the candidates for president or vice president. From January 15 to 18, of the 21 posts focused on candidates, 25 discriminatory attacks were detected, that is, there is more than one attack per number of publications, according to monitoring.

Public reporting can lead to results

Katherine Mata, former vice-presidential candidate for the Ecuadorian Union, who distanced herself from her binomial during the electoral campaign, mentions that, despite the fact that at the beginning of this proposal the experience was quite good, along the way she was distorted by feeling, for example, excluded from meetings and decisions by people who also started in politics, in addition to attacks on social networks.

Mata, who identifies as a defender of children’s and women’s rights, says they tried to politically violate her image, but was not affected as a woman.

She considers that it may be ignorance of the law that causes few complaints, but adds that beyond doing it legally, many women do so publicly, which causes society to censor these acts, find out that there is this permanent political violence and reflect on this problem.

Santiago Pérez Samaniego, who teaches the Unesco Chair of Culture and Education for Peace at the Private Technical University of Loja (UTPL), expresses that this last campaign has seen political violence against women in relation to the limited participation in the ballots. electoral, as a filler, as well as within political parties, where the processes for them to intervene are not equitable either.

It points out that politics is a space that lends itself to this type of political violence against women, which is why it is necessary to analyze factors such as fear of reporting and the situation of political uncertainty that exists in the country.

Pérez believes that more than sanctions, an attempt should be made to eliminate these stereotypes against women through education, not only in electoral participation, but also these types of manifestations such as belittling the work of women in the performance of certain public positions or candidacies.

Cecilia Calderón, with extensive experience in politics and candidate in 2019 for the Prefecture of Guayas for Juntos Podemos, emphasizes that women who suffer political violence do not have the support of the party or movement to face political violence. “They are alone because they have no real link with the party that should defend them (…); there is violence within the parties themselves, there is no real awareness of what citizen participation is, ”he says.

Remember that political violence is not from now, because she lived it during the electoral campaign, when she was almost the only woman in politics and she had to get ahead.

Calderón points out that the law to eradicate violence against women, which creates a protection system against violence against women, does not work. “A very long law, difficult to understand, cumbersome, full of concepts (…); Laws are not for scholars, they are for citizens and that is why they must be simple, straightforward, concrete, ”he emphasizes.

The main barrier to the exercise of citizenship

According to an OAS report, political violence against women continues to be one of the main barriers to the exercise of citizenship in Latin America. And although sustained efforts have been made in recent decades to promote women’s access and exercise of power in democratic institutions, it is still necessary to change practices, values, ideas and rules that contribute to normalizing the presence of women as figures of power, he points out.

The possible routes of action range from the dissemination of ideas and affirmative action measures within the parties, to the promotion of protocols and laws that clearly and rigorously typify all dimensions of gender-based political violence, according to the report. .

In addition, the political will of the political parties, their leaders and their militant bases, is essential to feminize politics and generate courses of action that eradicate the practices that affect (and sometimes take away) the lives of women. (I)

This is the procedure before the TCE to file a complaint

There are two instances to file a complaint for political gender violence: the first corresponds to a designated electoral judge or to the plenary session of the TCE

The requirements that the complaint must contain are contained in article 245.2 of the Democracy Code and article 6 of the Rules of Procedure of the Electoral Contentious Tribunal; are as follows:

1. Designation of the body or authority before which the appeal, action or complaint is filed.

2. Full names and surnames of the person appearing, with the precision of whether he does so for his own rights or for those he represents, and in the latter case, the names or denomination of the represented person (s).

3. The act by which the appeal, action or complaint is filed, who issued the resolution and the identity of who is attributed responsibility for the act must be specified.

4 . Basis of the appeal, action or complaint, with clear and precise expression of the grievances caused by the act, resolution or fact and the violated legal precepts.

6. If you present evidence, you will attach the list of witnesses, with copies of certificates specifying the facts on which they will testify, as well as requesting the appointment and report of experts; the exhibition of audio and video, institutional reports, etc.

7. If you do not have access to the documentary or expert evidence, its content will be described, specifying the institution that has it to request it. The request for access and electoral litigation assistance to the test must be presented in a substantiated manner.

8. It is necessary to request a contentious electoral box and indicate an email for notifications.

Nemonte Nenquimo: “The jungle is our home, our pharmacy, our market, our temple”